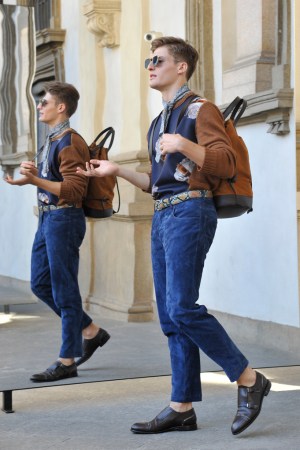 Trussardi once again held its presentation at the art gallery Pinacoteca di Brera and tapped a group of actors, complete with their stereotypes and quirks, to symbolize the modern man. They performed in front of a series of mirrors in roles that varied from the painter or the hippie to a drunkard and the motivator.

“I was thinking of artists Ligabue and Vincent van Gogh, and the bold strokes they used to paint the clothes of the male figures in their paintings,” said creative director Gaia Trussardi. “I was looking for fabrics that would convey the idea of movement.” Case in point: a pinstripe suit where the irregular lines “break up the texture.”

The idea of role-playing also translated into a print that showed an antique chalk mask with a bold red brush stroke over it. Contradiction is further exemplified by formal jackets and vests juxtaposed with jogging pants and materials such as Neoprene and raw linen that contrasted with denim and suede. Trussardi also reworked python leather pants with a touch of Bohemian dandyism.

The installation worked as a backdrop for a collection that was in sync with Trussardi’s “pop ‘n’ roll” inclinations.