The upscale Golden Fleece collection was among the focused categories for spring. 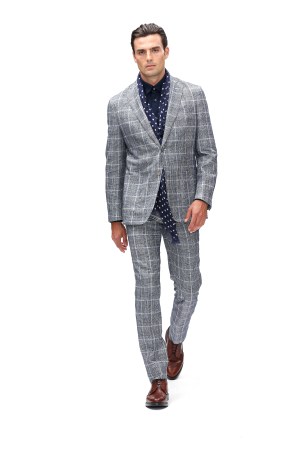 Brooks Brothers shined a spotlight on its Golden Fleece luxury collection for spring.

The upscale capsule, which is now in its second season, is produced either in the company’s factories in the U.S. or in Italy. The tailored clothing is “light as a feather,” according to chief merchandising officer Lou Amendola, pointing to the lightweight, deconstructed suit jackets and sport coats in a variety of patterns and solids.

Merino wool sweaters, in V-necks and crewnecks, were produced using seamless knitting technology for the first time this season, Amendola said. Although wool, the sweaters were so light — 15.5 microns — they could double as a T-shirt.

Outerwear was offered in technical and double-face fabrics and included a coat that was bonded to repel water and a mixed media bomber in suede with nylon sleeves.

In the mainline collection, floral prints will be dominant for spring in cotton polos, button-down popovers, oxford button-downs and swim trunks. The polo button-down oxford is now being offered in an array of colors and patterns including Bengal stripes and plaids. Additionally, all polos will now be made with Supima cotton starting in the spring, although the price point will remain at $69.50.

Tailored clothing color choices were widened with bright blues and light grays added. BrooksCool, a breathable stretch fabric that is crease- and water-resistant is also being introduced in suits for the season.