Designer Devin Carlson was inspired by 1996 with its boxy high-waisted pants and elongated bombers. 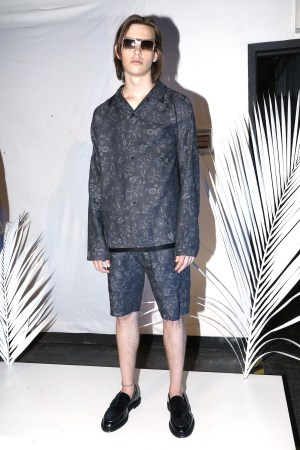 Chapter’s Devin Carlson, who is based in California, has developed a look that’s rooted in nostalgia from the Nineties — his last collection referenced the movie “Swingers” — and this season 1996 was on the brain. He looked to Baz Luhrmann’s “Romeo and Juliet” starring Claire Danes and Leonardo DiCaprio, which was released that year, and light sculpture artist Dan Flavin, who died that year.

The blue lights that illuminated the room were an ode to Flavin, but Luhrmann’s film was central to the impressive lineup of boxy, high-waisted trousers and shorts styled with elongated bomber jackets, bowling shirts and mock neck T-shirts with drapey sleeves. Zipper details, a Chapter signature, decorated the pieces along with tonal embroidery that read “1996.” Carlson, who said his bottoms are popular with retailers, updated the pants silhouette with a slight bell shape. He also worked with prints for the first time, which were mostly floral or palm motifs, and synthetic fabrics to create an easy drape.

Carlson’s approach seems to be working. In addition to being sold at U.S. retailers including American Rag, Odin, Ron Herman and Revolve, he’s recently been picked up by Harvey Nichols and Selfridges and will launch a women’s line, which will be sold at Need Supply, this fall.