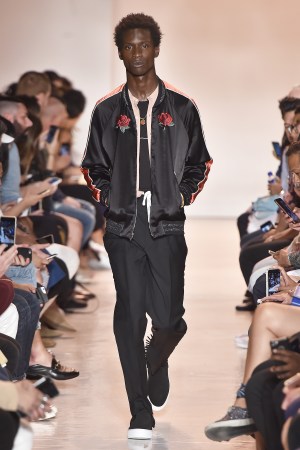 Long gone are the days when Ovadia & Sons presented traditional tailored clothing. Twin brothers Shimon and Ariel Ovadia took another step toward defining their lifestyle brand. “We’re feeling a really chilled out vibe,” Shimon said. “We took our inspiration from hippies and Rastas and blended it with New York and military.”

The star outerwear piece was the souvenir jacket, which was shown in a variety of colors and fabrics, from silks to velvets. The show also served to introduce a new capsule denim collection of patchwork jeans and trucker jackets.

While Ovadia’s message came through loud and clear, the offering felt a bit derivative at times.