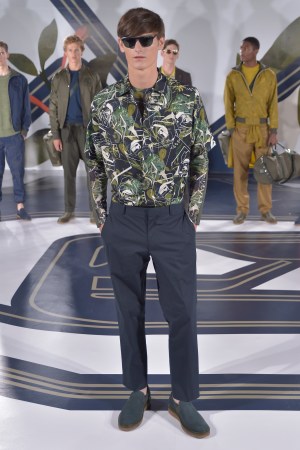 Michael Maccari continued to successfully juggle the past and the future with his spring collection for Perry Ellis.

In the kickoff presentation of New York Fashion Week: Men’s on Monday morning, the creative director offered up a smooth transition from the shows in Europe with his lineup of technical outerwear, athletic references, graphic prints, a dusty color palette and a new take on the suit.

“It’s a collage,” he said as the models walked through a raw space at the Hippodrome building in Midtown. “There’s an idea of layering — mixing fabrics and mixing lifestyles.” Case in point: a waxed nylon bomber was worn over a Neoprene warm-up suit and linen sweater T-shirt, while a botanical print mesh track jacket was shown with knitted nylon shorts.

There were two distinct prints in the collection, a “straight-up botanical and a linear floral,” he said, that helped lighten the mood.

Maccari said that with all the upheaval in the world today, he was striving to make a different statement. “I wanted the collection to be uplifting, playful and fun.”

He also set out to reinterpret the suit, which in his mind is now defined as a tracksuit. One of the strongest pieces in the lineup was an ultralight deconstructed jacquard suit in navy that looked like it would be as much at home in the gym as in the office. It was worn over a knit mesh shirt in the same color.

Now two years into his role as creative director, Maccari is proving once again that while he respects the sportswear legacy of the late Perry Ellis, he is forging his own way.