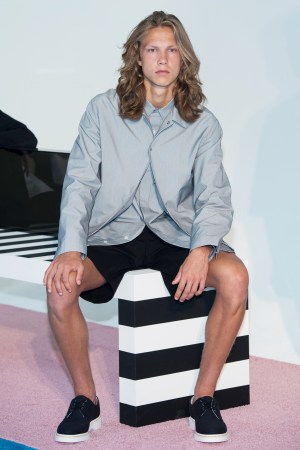 David Hockney was the starting point for Jae Wan Park, the designer behind Plac, a brand based in South Korea that’s steadily built its U.S. stockists since debuting on the New York men’s circuit about two years ago — the collection is sold at retailers including Saks Fifth Avenue and Bloomingdale’s.

For spring, Park mined the artist’s paintings and personal style to create what he called a “gentleman’s summer wardrobe” that was influenced by Sixties silhouettes. The tight lineup featured tonal looks made up of cotton shirt-jackets, short-sleeve cotton shirts and relaxed trousers or shorts, which were broken up with striped and graphic T-shirts, a first for the designer. The outerwear — oversize parkas and relaxed top coats — hit a high note.

Park did indeed create a wardrobe that men would want to have, but he failed to produce aspirational pieces that push men’s wear forward.