The Dutch retailer, which operates 20 stores in the U.S., held a presentation during New York Fashion Week: Men's as a way to further introduce Americans to its suit-skewed concept. 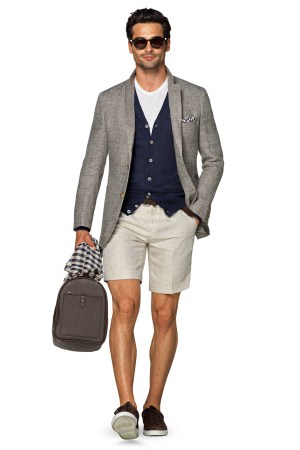 Suitsupply continues to work to raise its profile in the American market.

The Dutch retailer, which operates 20 stores in the U.S., held a presentation during New York Fashion Week: Men’s as a way to further introduce Americans to its suit-skewed concept.

“We do this for the fashion press, our top clients and the social media we get,” said founder and chief executive officer Fokke de Jong, pointing to the dozens of attendees snapping photos of the well-dressed men modeling the brand’s spring collection at the company’s SoHo store.

The spring line took its cues from the Bauhaus era, which focused on items that enhance lives. In terms of apparel, this translated into linen suits, sweaters and ties blended with cashmere, cotton and silk that were designed to be comfortable in warm temperatures. The brand’s Traveler collection, specifically targeted to the globetrotter, was updated with “mobile, suitcase-friendly pieces like suits and shirts,” the company said.

The color palette was restrained and tonal, homimg in on off-white, navy and burnt orange — hues that complemented the season’s textural fabrics.

De Jong said that while other retailers may be struggling in the U.S., Suitsupply is holding its own. “The market is pretty good,” he said. “We’re getting more and more people to appreciate what we’re doing.” The company just opened a flagship in San Francisco and is on track to add several units in North America this year in Greenwich, Conn.; Tampa, Fla.; Austin, Tex.; Montreal, and Vancouver, he said.