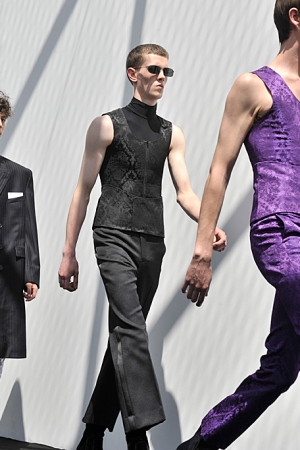 What could a camera drone buzzing high above the caged rooftop of a Jesuit school in Paris capture of Demna Gvasalia’s debut men’s collection for Balenciaga — and the brand’s first men’s runway outing in its 99-year history?

Plenty. For even high in the sky one could have perceived something radically new finally stirring up a relatively ho-hum men’s season in Europe.

Not since Hedi Slimane’s emaciated rockers stormed down the runway some 15 years ago has anyone at a major house paraded a silhouette this severe — coats and suits with shoulders as wide as a fridge, immediately followed by the opposite: suffocating, shrunken styles on models with ironing-board physiques, most of them cast on Instagram.

Time will tell if the David Byrne look makes any sense to young generations weaned on droopy jeans and sloppy hoodies — and even Wall Street types now allowed to dress casually. To be sure, Gvasalia’s commitment to tailoring — and extreme versions of it — puts the heritage brand back in a couture context, and won’t blur with Gvasalia’s streetwear-driven Vetements project.

While challenging, his Balenciaga clothes had such conviction behind them — and a peerless execution — that they commanded attention, and are bound to be influential. Those boxy coats had a handsome swing at the back, and the sweep of the shoulders broadcast authority and cool.

The swaddling coats and jackets were less convincing. More effective in the bodycon vein were high-waist, stovepipe pants and crisp shirts, cropped and ending with the elastic bottom of a Harrington jacket.

While the show had solemn airs, there were hints of irony and humor, like the Balenciaga business cards tucked into pockets in lieu of handkerchiefs. Big blue leather weekenders seemed modeled after Ikea’s Frakta carrier bags.

The show climaxed with square tuxedos and fancy jacquard vests and scarves with ecclesiastical airs. Amen for something new in the black-tie department, too.