Jason Basmajian broke up the formality of classic suits and launched the brand's new denim line. 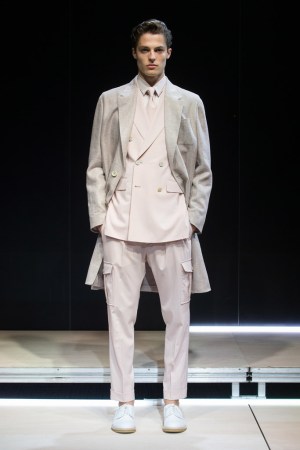 Jason Basmajian was searching for words to describe his spring offering, eventually settling for the word “relaxed,” though he noted that only the French could say it right with their vision of “décontracté.” Translated into actual garments, this meant breaking up the formality of classic suits via cropped, cuffed pants that were pleated but had large utility pockets protruding from the sides, which essentially gave them a youthful spin. Blazers were loosely fitted or replaced entirely by military-type shirts in cool wool instead of cotton. Soft unlined dusters let off a chic yet mellow vibe, as did this season’s dusty color palette composed of faded mint and pink, off-white, moss as well as an array of blues, arranged in tone-on-tone dressing.

It all looked crisp and relevant.