Just when you thought athletic influences were running out of breath, Kris Van Assche gave them a second wind. 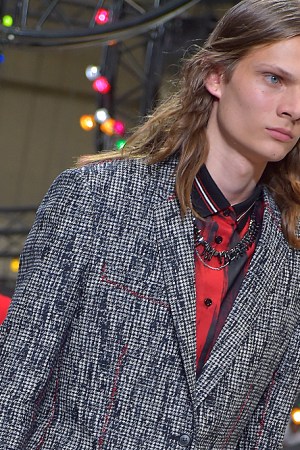 The models zoomed through Dior Homme’s suspended roller-coaster set so swiftly that one would think they were on skateboards. And they wouldn’t have looked out of place riding them, even though many were wearing suits.

Just when one thought athletic influences were running out of breath, Dior Homme gave them a second wind — and they looked terrific, from the stripes running over the sleeves of two-button jackets to the tracksuit chevrons painted with a roller onto suit and coat sleeves.

Van Assche also blended in references to punk, Goth and New Wave, among the musical camps when he was a fashion student at the Royal Academy of Art in Antwerp and its biggest amusement park was a magnet for all the cool kids. He didn’t hold back with the theme, riddling sleek black suits with staples; jagged Frankenstein stitching, or a messy tumble of red shoelaces threaded through grommets.

Pants spawned utility pockets, D-rings or side stripes and assumed various guises: from skinny jeans to wide raver styles. Most clever of all were two finale banker suits — one skinny, one loose — each with pinstripes peeling away to become a rebellious fringe of errant threads.

Dior Homme’s campaign faces A$AP Rocky and Rob Pattinson were among VIP guests at the show, along with Karl Lagerfeld, who photographed the “Twilight” actor for the pre-fall campaign. The German designer, considered one of Dior Homme’s biggest clients, seemed bemused by the set and the collection. “I thought it was great — one of his best, if not the best,” Lagerfeld pronounced.