Whereas last season’s focus was more about layering and tailoring, here the collection was stripped back to its skeleton, mixing in some skin. 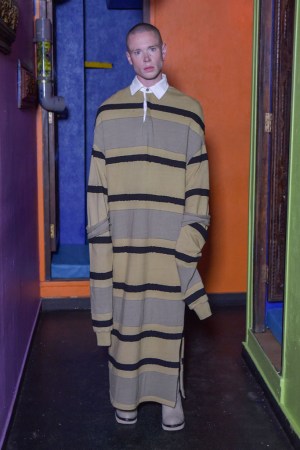 With couture week looming, Hood by Air’s Shayne Oliver has been busy perfecting his own take on the game – “men’s couture” – meaning the more progressive, atelier side of his brand. Not that the show venue had to be ritzy. Instead, the designer lured the fashion crowd to Sun City, a seedy – and sweaty – men’s-only sauna in Paris’s Sentier garment district.

There were no seats, either, as guests packed into a dimly lit upstairs corridor lined with private booths, pressing against the walls as a motley-crew cast of male models with shaved heads loomed out of the dark from all directions. Dressed in artisanal striped polo shirtdresses and jumpsuits with a vague inmate vibe or deconstructed American classics, sleeves trailing behind them, they stalked around in patent leather stiletto thigh-boots and snakeskin platforms.

In the mix were baby-pink buttoned-up shirts with built-in, wounded-bird arm casts and waistcoats with integrated body braces, with even Oliver’s signature logo items reworked to protectively wrap around the torso. The theme, said the designer, was partly inspired by his own “need for rehabilitation.”

Whereas last season’s focus was more about layering and tailoring, here the collection was stripped back to its skeleton, mixing in some skin.

“Relaxation” was another subtext, with hoodies hanging off the body and adjustable baggy pants with integrated underwear that looked half falling off. The line’s khakis, explained Oliver, came from “the idea of what is so not in fashion but is so relaxed and that to me would be a dad or father figure – but not in a kinky way – a typical American working dad in his Dockers. They are meant to look appropriately relaxed.”

Cue the show’s grand finale: a pool party in the site’s basement where the models stripped down to their undies and stilettos to enter the water through a layer of rolling dry ice – a captivating if bizarre scene. Laps in thigh-high boots may not be every man’s idea of how to unwind, but Oliver – the consummate showman – sure has a way of making an impact.