Humberto Leon and Carol Lim were inspired by Nineties nightlife for their collection of graphic club gear. 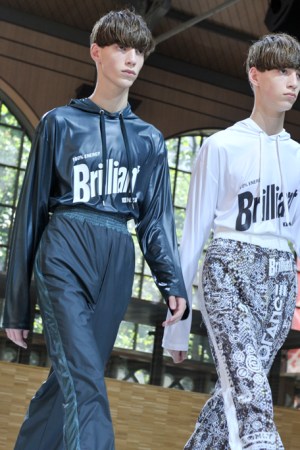 Hedonism as an antidote to news-induced angst: The concept worked for the bleary-eyed guests at Kenzo’s show on Saturday morning. A high-energy soundtrack of New York house, concocted by DJ Todd Terry, had the audience grooving in their seats as models in club gear sped past in tight little packs.

The look was Nineties redux: Think Windbreakers, baggy pants and visible boxer shorts, in a palette ranging from vibrant blues to box-fresh white and acid yellow. Humberto Leon and Carol Lim said they were inspired by the era’s nightlife – clubs like Sound Factory, Area, Tunnel and Limelight.

“In light of everything that’s happening, it’s really exciting to celebrate nightlife, which is something that we’ve always been so passionate about, and it’s where people just go and you don’t even think about anything. All you want to do is have fun,” said Leon.

The duo secured the rights to original club flyers and worked them into busy prints and logo hoodies. Lime yellow lettering covered a magnified snakeskin pattern, while tops featured names like “Paradise” and “Body and Soul.”

The looks nodded to the streetwear trend for reworked Nineties sportswear yet remained distinctly Kenzo, thanks to signature details like oversize eyelets and a new, long-lashed version of the label’s eye motif.

These also appeared in the women’s resort collection, which was shown alongside the men’s looks. The eyelets were used on denim jackets and pants, slipdresses and over-the-knee coats cinched with jeweled chains.

Cropped leather jackets and A-line minis, worn with wedge boots, brought to mind the Spice Girls – even if Cool Britannia feels like a century ago.