Lucas Ossendrijver went to town with patches, graphic bands and photo prints, delivering a Lanvin show that was grittier than usual. 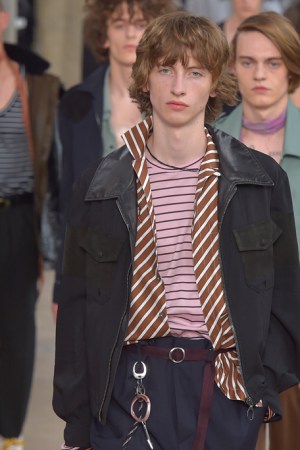 The streetwear trend is turning many fashionable men into walking Kindles. Outside venues and inside shows, brands and oblique slogans are splattered all over clothes: “A Cold Wall,” “Fear of God,” “Coming Soon” “Anti Social Social Club” or “Always Be Knolling.”

At Lanvin, Lucas Ossendrijver had lines of poetry circling waists: “It doesn’t matter right or wrong,” read one. He also splattered his spring collection liberally with patches, graphic bands, photo prints and symbols, including many arrows. It added up to a Lanvin show that was grittier and busier than usual. Even the socks, often shielded by soft lace-up boots, bore a pattern melding bamboo and cannabis.

Backstage, Ossendrijver insisted that in today’s uncertain fashion world, all he can offer as a solution is “creativity,” and said he avoids obvious references. “Festivals” was the only thing he would offer. “My goal has always been to make the clothes look like they belong to him,” he said, showing how he dabbed checkered suits with ragged stitching, insets of leather or rubber trim.

Ossendrijver is on to something. While the clothes were sometimes overcharged, they had individuality to spare and eye-catching detail. Handsome military blousons were sparked with scrolling white embroideries, tank tops had a spill of fringe around the ribcage, satin bombers were covered with airbrushed scenes of oil refineries, and boxy camp shirts came with reflective strips, or stripes heading any which way.

The silhouettes were mainly generous on top with rounded, dropped shoulders, vaguely reminiscent of the Teddy Boys, as they often are with Ossendrijver. Word has it the Dutch designer, who has already logged a decade at the house, is in talks to renew his contract at Lanvin, whose new women’s designer, Bouchra Jarrar, sat in the front row. She is to show her debut collection this fall.