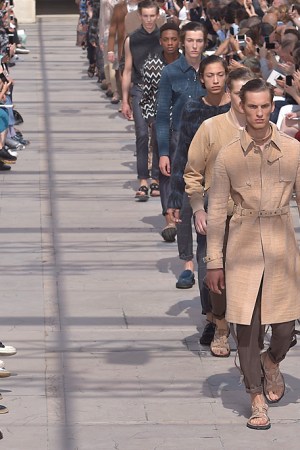 Imagine a young boy touring the savanna in Kenya and alighting upon the Maasai people in their vivid red and blue clothing. It’s one of Kim Jones’ strongest and most treasured memories — and it inspired one of his first hit collections as men’s style director at Louis Vuitton five years ago.

The designer, who spent part of his childhood in areas of Africa such as Botswana, is a travel fanatic and as smitten with Africa as ever, and its biggest cities, Capetown being a prime example, now shelter fascinating street fashions. “The style down there is so cool,” Jones said during a preview, flicking through photo books by Jackie Nickerson, Pieter Hugo and Frank Marshall, the latter documenting the heavy-metal subculture in Jones’ homeland.

For his brisk open-air spring show, the designer got savanna heat and blazing sun, which didn’t seem to phase front-row guests David Beckham or Victor Cruz, both dressed in long-sleeve sweaters, styles that appeared on the runway in shaggy mohair with springbok fur patterns.

The mohair styles looked cool over checkered pants licked with silver zips, among the punk accents that spiked the African theme. The collection had a youthful zing, interspersed with luxury marvels, including a “denim” jacket made of matte crocodile, a molded leather vest with a diagonal zip and a Perspex blanket trunk etched with a giraffe drawing by Dinos and Jake Chapman.

The Chapman brothers’ wonky, goggle-eyed renderings of the Big Five animals made for fun novelty sweaters, swanky silk shirts and covetable leather goods — elephants and lions splashed on a new blue and cream version of Vuitton’s famous monogram. Come spring, they are bound to be hot properties.