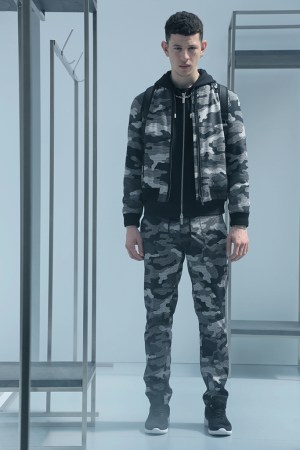 The sweltering temperature under a glass atrium in the 3rd arrondissement knocked home the locker-room message Maxime Simoëns was aiming to transmit with his first men’s collection under the newly created M.X. Maxime Simoëns label.

Simoëns, who put his women’s collections on hold last year and parted ways with financial backer LVMH Moët Hennessy Louis Vuitton, made his reentry with a collection resolutely focused on urban sportswear.

Heavy on the camouflage in a palette including red, blue, gray and khaki, Simoëns used tracksuit jerseys to create slim-line tailored pants and combat shorts, while the lines from a sports court weaved across several designs including a gray tailored jacket. Zip-up striped high-neck tees and others printed with graphic dot motifs were more reminiscent of cycling wear. “LAD” was the loud and clear message printed on several items, and more of a street vibe was transmitted on a denim shirt and several T-shirts featuring metallic studs.

Simoëns’ offer was certainly a departure for the designer, who aims to offer today’s young men a complete, affordable proposition going from underwear and sportswear to tailoring with an urban twist as well as accessories.

The line is made in Europe with Italian and Turkish fabrics and will be priced from 85 euros, or $96.50 at current exchange, for a T-shirt to 1,000 euros, or $1,135, for a leather jacket when it goes on sale online next month. A stand-alone store is planned for the upper Marais in January.