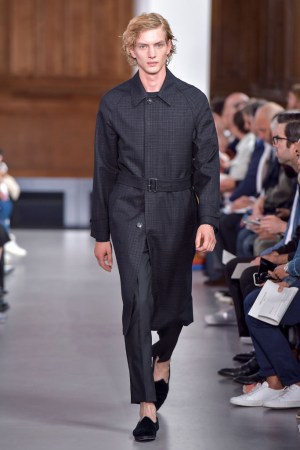 Quintessential Parisian style is often summed up with the phrase “je ne sais pas quoi,” which essentially refers to an attitude of carelessness paired with subtly calculated risk. It’s a paradox, but a fascinating one, and Pierre Mahéo, himself a Left Bank resident, usually captures it in his collections. But the designer admitted that, for spring, he needed a little boost from a friendly neighboring country. “I had a hard time putting myself in the summer mood. Go figure why,” he wrote in his show notes, adding how the somber mood in Paris following the city’s tragic events and the constant threats “left a bitter taste in my mouth.” In April, voluntarily exiled himself “to a little piece of heaven in Tuscany” to find inspiration.

The cuts were clearly in Officine Generale’s territory — charming pleats over loose hips as seen on cropped carrot trousers, fitted suede jackets with a workwear zest, and no-nonsense knits. But the fabrics took cues from the Italian sun. Among the standouts were beautiful, indigo-washed seersucker used for light summer tailoring; a few palm-tree prints on sheer, open shirts, and striped pajama tops, which Mahéo assured would be equally at home on the beach and the street.

Elsewhere, the designer stuck to his formula of transseasonal dressing, sending out outerwear pieces that were done up in Loro Piana’s water-repellent storm system, such as a lean, tailored trench in silk-wool, styled with black velvet slippers from Venice. Travels inspire, without a doubt.