Models loped a rainbow runway in snazzy clothes that were just as colourful - and occasionally trippy. 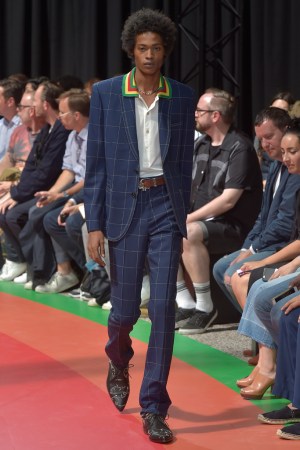 A Bob Marley medley backed Paul Smith’s spring show, where models loped a rainbow runway in snazzy clothes that were just as colorful, and occasionally trippy.

The Caribbean palette and rasta plaids telegraphed an island vibe, even if the original impulse came from London clubs the British designer frequented in the Sixties and Seventies, including the Flamingo Club and Whiskey-a-Go-Go.

“They were always full of an eclectic mix of people. Self-expression was the thing,” Smith explained backstage, noting he also wished to convey happiness and optimism.

The tailoring was trim, the classic two-button styling a foil to the Lifesaver palette, those candy colors repeated on striped sweaters and polo shirts. Embroidered jeans and T-shirts printed with floral garlands and the word Peace added a bohemian flare.

While shy on newness, the show charmed with its pileups of vivid color and pattern. Indeed, some of the models couldn’t stop smiling on the runway, though the upbeat clothes and summery soundtrack weren’t the only reasons. “I was giving everyone a shoulder massage on their way out,” Smith noted.