The sartorial collection essentially riffed off a surfer’s wet suit, and if one thought the new Balenciaga power suits were boxy, think again. 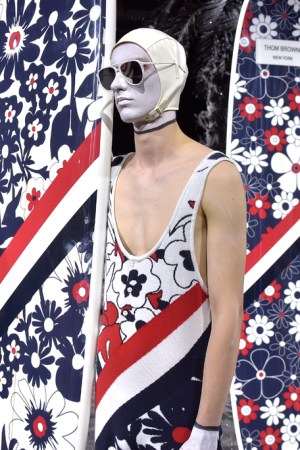 Thom Browne opened his show on a benevolent note. “Good evening everyone,” the designer’s voice resounded from backstage. “This is Thom Browne. Please take a moment of silence for the incomparable Bill Cunningham,” he asked in honor of the late New York Times photographer who died Saturday.

Shortly after, the opening notes of “Jaws” marked the beginning of a well-rehearsed performance involving a shark (cue a model circling imaginary waters in a shark mask and an extra-extra-drop crotch suit with the predator’s fin attached to the back); a desert island, rendered in the brand’s signature grey hues (or perhaps it was just a volcanic island), and a whole bunch of models.

They would change three times.

The sartorial collection essentially riffed off a surfer’s wet suit, and if one thought the new Balenciaga power suits were boxy, think again. Browne’s made even the skinniest models look like professional sumo wrestlers. Surprisingly, they all turned out to be onesies.

Later, a second layer revealed a flurry of formal men’s ensembles. Cue a lemon yellow Mackintosh with bold hibiscus embroideries; a white linen suit jacket, also embroidered, and jacquard shorts, all adding up to one look. Elsewhere, the wetsuits came in the shape of silk duchesse tailcoats; cashmere, seersucker or mink jackets; tweed and raffia overcoats, and rubber cardigans to name just a few of Browne’s witty combinations.

With one pull of the zip, models took those off, too, to give full view of a series of colorful intarsia-knit swimsuits, before they hit the waves with their custom-made Thom Browne surfboards. “Yes, they will be for sale,” the designer confirmed backstage, with the shark still looming in the shallow waters.