Yosuke Aizawa’s collection was divided into two parts – his own, followed by a collaboration with Adidas Originals, now in third season. 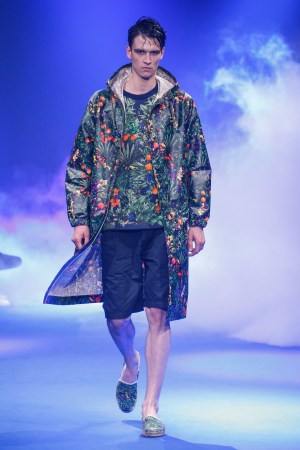 Yosuke Aizawa’s collection was divided into two parts – his own for White Mountaineering, followed by his collaboration with Adidas Originals, now in its third season.

Strong graphics dominated the first part, starting with tropical fruit and a deep-green jungle thicket, which gradually turned quieter via ethnic Asian and pointillist camouflage patterns. They proved a good counterbalance to a set of streetwear essentials, including raincoats, sweatshirts and boxy shorts, but also bowling shirts and lounge carrot pants. Throughout, the lineup oscillated between dressy and sporty, and while seeing a hooded anorak in technical fabric next to a bathrobe-y coat in cotton and linen took some getting used to, this was meant to be a pick-and-choose collection, with Aizawa wishing to reference “all summer activity,” as he put it backstage.

The Adidas outing impressed with an injection of color and bold three-stripe visuals forming a smart “W” on short-sleeved hoodies with elegantly rounded shoulders, and modern ensembles that layered a pair of shorts with kilt-like fronts, in one instance. Windbreakers, track tops and crew sweats complemented the seasons. “I see it as a uniform for the street – one you can really wear – which is not precious and which you don’t have to protect,” noted Nic Galway, vice president of global design for Adidas Originals, branding the term “urban mobility.”

The executive also pointed to three new footwear styles, which made their debut on Saturday: the EQT Support Future, whose older cousin helped rebuild the brand during a tough time in the Nineties and is now a collectors’ favorite; the NMD Trail, featuring a more rugged sole and protective toe, and the R2, the newest member of the NMD family, with a clean aesthetic and an inside support layer.