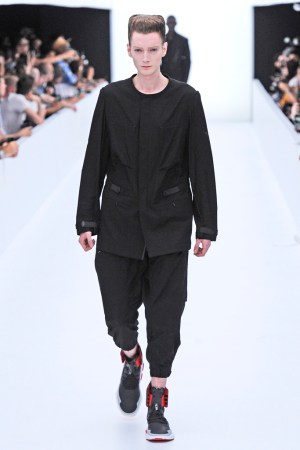 “I hate that we have to wait for the future. I want the future now. I don’t want to wait,” Yohji Yamamoto mused backstage, wearing his trademark fedora and cloaked in his usual smoky black layers. But on his feet were a pair of NOCI 0003s, a sleek new high-top to rival the Air Mag in “Back to the Future.”

The shoes, made in collaboration with Adidas, accompanied a futuristic, borderline clinical collection sent down a blinding white corridor that would not look out of place in a “Prometheus” sequel. The clothes for men and women were mostly black, in spongy or sooty textures, and often telegraphed dystopia, accessorized with face-obscuring hoods or visors, drinking (or breathing?) tubes snaking from backpacks into the mouth. The shapes pinged between strict and neat – exalting the purposeful nature of military uniforms — or large and enveloping, including handsome capes, some with honeycomb textures.

IV tubes poking out of surgical green smocks and boiler suits were disquieting. Geometric elements telegraphed the theme more subtly, from origami ruffles suspended from tank dresses to oversized shirts with plackets resembling airlock doors. For the finale came three outfits with built-in fans that inflated as the lights pulsed.

In another context, these clothes will simply look cool worn for urban pursuits, including dog walking. Every morning, a sneaker-shod Yamamoto takes his Akita, named Ryn, for a 40-minute stroll. “She only loves me,” he smiled.