The designer used himself as inspiration for the fantasy-skewed collection. 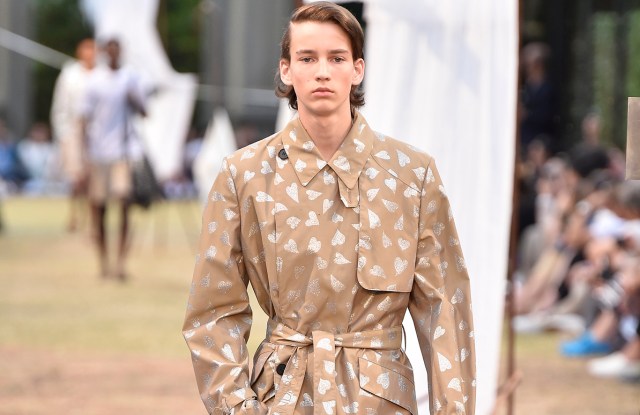 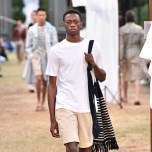 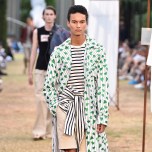 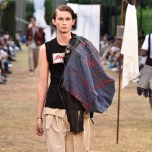 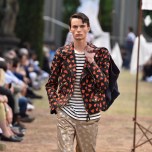 Is Jonathan Anderson gunning to become a household name? He’s got a collaboration with Uniqlo this fall, and he dedicated his coveted guest slot at Pitti Uomo to a collection hinged on his simple, personal style — along with the right doses of whimsy and quirk that his brand represents.

Given the show’s romantic setting, in the gardens of the La Pietra villa in the hilltops of Florence — scented with lemon trees, and accompanied by a soundtrack of chirping cicadas — the fantasy-prone designer could have gone all out. Instead he went — dare we say it? — a tad commercial, albeit with his childish touches and playfulness intact.

In the run-up to the show, the London-based designer called his spring effort “the first collection that is a reflection of me, as a personal fantasy of what I would actually wear.”

Among the highlights in the denim-heavy collection were baggy jeans with origami folds, cool updates on the classic perfecto jacket, Pop Art-tinged patchwork sweatshirts and great Aran sweaters with nautical motifs that nodded to the designer’s Northern Irish roots.

Save for a couple of crafty oversize T-shirts and pants, the collection centered on updated men’s wear staples: the biker jacket, bomber, jeans jacket and hoodie, along with the regular-guy T-shirt and cargo short.

SEE ALSO: Mirror Image: Jonathan Anderson Looks to His Own Style for Spring

Anderson also jumped on the logomania bandwagon, tongue firmly in cheek. His name came splattered all over a youthful lineup that also tipped its cap to America, replete with a Converse collaboration on sneakers. His face peered out from under an Army helmet on a faux vintage Coca-Cola poster adorning one of the collection’s boxy T-shirts, his hand clutching a mug of J.W.A. brew.

Irony aside, it served as a powerful branding effort for a designer who — having also flexed his capabilities as the creative head of Loewe since 2014 — seems primed for the big leagues. And smartly so, given the platform Pitti offers.

In today’s digital world, where Instagram is king, he also chose the right print motif in hearts: Sweet and innocent at first glance, they’re also one of the biggest thumbs-up emojis in the world.

Virgil Abloh to Take ‘Temperature’ of Our Times at Pitti

Ones to Watch: Some Brands to Check Out at Pitti Uomo