Samuel Ross looks to a futuristic dystopia for spring 2019. 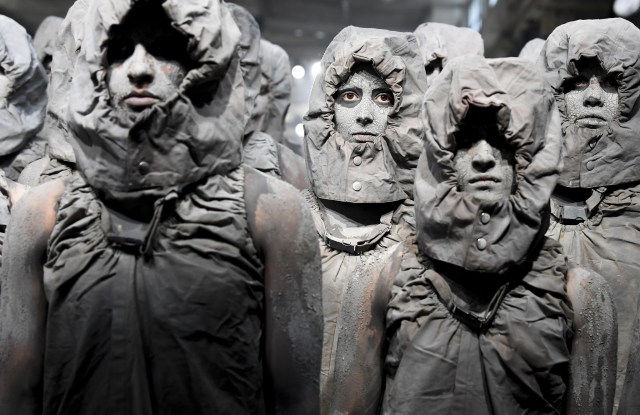 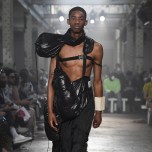 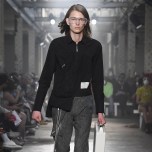 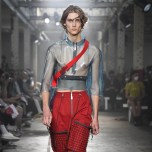 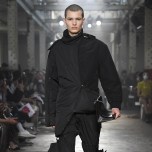 Samuel Ross’ brand A-Cold-Wall is continually seeking to expand the fashion vernacular by playing with new proportions and alternative ideas of beauty. Ross’ latest collection was presented as an immersive performance at the Old Truman Brewery that was conceptual — but not necessarily accessible.

Guests were advised to put on protective goggles, masks and earplugs monogrammed with the brand’s acronym that were handed out at the door. Wind turbines and haze created a doomed, dystopian atmosphere, and the show began with a group of actors wearing hooded smocks and chalk-painted skin storming down the runway. Models showcasing the collection followed.

Utilitarian sportswear has been the foundation of the brand and this season, Ross purged it of its traditional aesthetic. He took the basis of sportswear, deconstructed it and morphed each piece into new silhouettes. Included were cropped outerwear in thick layers of transparent PVC paired with pouches that wrapped across the bodies. Puffy vests were deconstructed and held together by seatbelt webbing and clip closures. He did the same with down jackets, which he dissected and laced back together with metallic silver leather with asymmetric sleeves, and cargo shorts and pants featured oversized pockets that distorted the silhouette.

“It’s really art,” Ross said after the show. “Streetwear really isn’t the term now, but it’s been integral to this journey.”

The show ended with a polyethylene cube being dragged onto the runway and destroyed, revealing a naked male dancer painted in red spilling out of the water-filled structure.

The collection was strong but the performance overshadowed the clothes as guests were buzzing about it for the rest of the day.