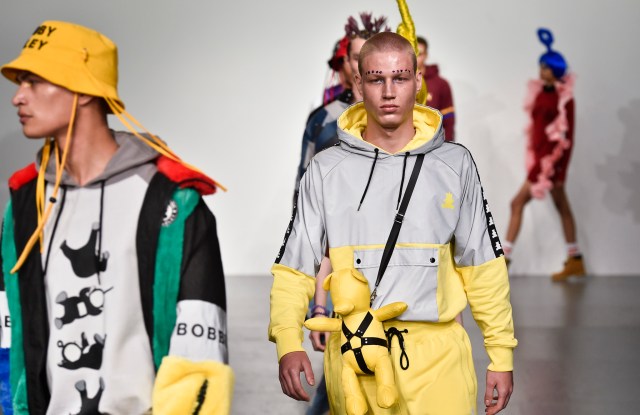 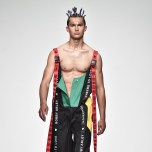 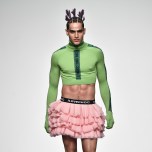 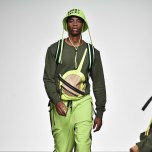 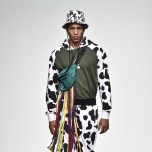 Dipsy, the Teletubby, in all his lime green plush glory, complete with twitching nose and kawai blinking eyes was the star attraction that closed Bobby Abley’s show, skipping and prancing adorably around the catwalk.

Last season it was the Power Rangers, this season Teletubbies. A non-sequitur, sure, and some cynics might raise an eyebrow at the principles behind the pairing and wonder if Abley is treading a line perilously close to selling out, but it was fun and looked good, so who cares? A guy’s gotta eat, and there was plenty to like in Abley’s treatment of the children’s characters.

The Teletubbies appeared in backpacks and printed on Ts with long streams spouting from their bellies, while Abley’s signature bear logo was worn on belts, transformed into 3-D and wearing mini bondage harnesses. Christina Aguilera, the designer’s other, enduring obsession, was printed in black and white onto black T-shirts.

Abley’s signature use of sporting codes was nicely put to use in a pair of blue silk boxing shorts, trimmed with baby pink and patterned with blotchy white stars that came with a matching shirt, and in the cropped oxblood hoodie emblazoned with a golden e-passport logo — a nifty little comment on the current political climate here.

Women’s wear was also in the mix, brought nicely along from the his-for-her looks of previous seasons in a brick red knit dress with cheeky bosom and crotch markings and playful pink frills down the sides and over the shoulders. There was also a maxidress done out entirely in frills that looked like a giant pink mille-feuille. Sounds wrong, looked right.