A riotous cast of characters, unified in their theatricality and Jeffrey's joyous treatment of his theme: debauchery. 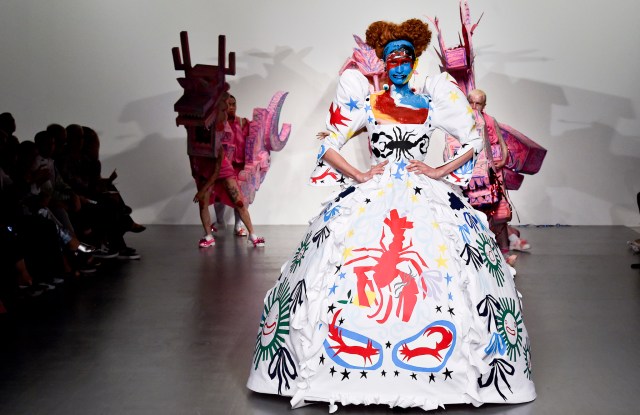 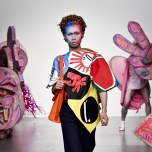 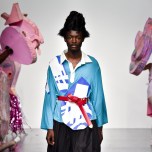 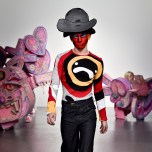 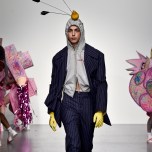 Having graduated from the Man group shows to a stand-alone show of his own, Charles Jeffrey wholeheartedly embraced the limelight for his Loverboy label, sending forth a diverse cast of characters, unified in their theatricality and Jeffrey’s joyous treatment of his theme: debauchery.

Far-reaching references to Matisse, Hogarth’s “A Rake’s Progress,” a book on cross-dressing through the ages, Elizabethan courtiers, Hussar soldiers and punks appeared in a gender-refusing, schizophrenic, theatrical and OTT line-up.

Dodging dozens of dancers swathed in pink carrying homemade cardboard props, Jeffrey showed his tailoring prowess in sharp jackets and pants in either checks or bold stripes, while one pair of buckled skin-tight green check pants were a nod to punk aggression.

There was a Dior-like skirt in corporate pinstripes with Watteau hips; a sombre Mother Superior stalked down the runway in a black habit, branded wimple and lace mantilla trailing behind, defaced with phallic graffiti.

“The past is a country anyone can visit,” Jeffrey explained after the show, which was utterly non-linear, brilliantly bonkers and a testament to his collaborative process, which saw Jeffrey, one of the new wave of LGBTQ creative, harnessing the skills of costume designers Gary Card and Jack Appleyard, choreographer Theo Adams and Jordan Hunt for music.