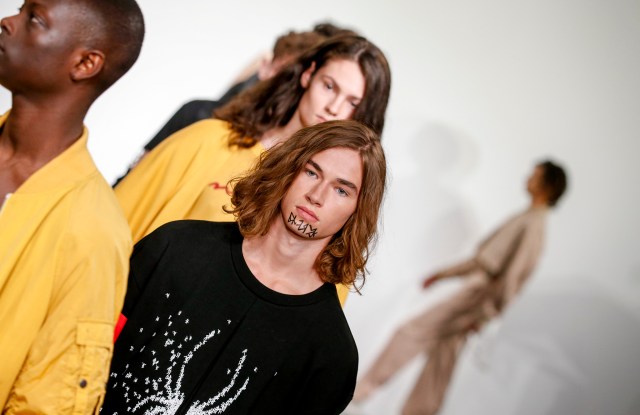 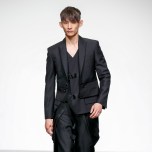 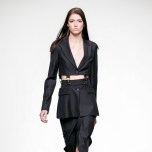 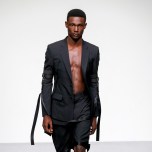 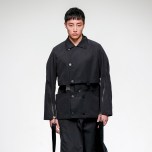 Jun’s central theme revolved around Chinese characters that translated as “inevitable interaction” or “the coming together of two powers.” He also looked to the symbols of yin and yang, which is a Buddhist principle pertaining to cause and effect.

The designer blended his South Korean and Western tailored aesthetic with more color this season and sent a well-tailored range filled with smart silhouettes. He worked a palette of beige, mustard, yellow and red into his lineup filled with suiting, oversize shapes and utilitarian touches.

He applied details such as belt loops, buckles, strings and zippers, as seen in an elongated beige sweatshirt and tapered military trousers in the same hue. The accents were also added to a beige cropped trouser suit that had an asymmetrical hem — with sleeves treated with zipper embellishments.

Jun teamed with Universal Brand Development and designed garments inspired by “The Mummy” movie. He took a spider and created a logo on a black sweatshirt, which was styled over black cropped cotton pants. The arachnid print was also on a black T-shirt worn under a black kimono-style jacket and ankle-length wool trousers.

Tailoring was strong as seen in a beige trouser suit that came cropped or in an all-white ensemble comprised of a long coat, white shirt and ankle-length pants.

He injected a few women’s wear pieces, which took the same cue as men’s wear in a black jacket and black shorts embellished with flowy utility straps.