Quite the mixed bag from Per Götesson, Art School and Rottingdean Bazaar. 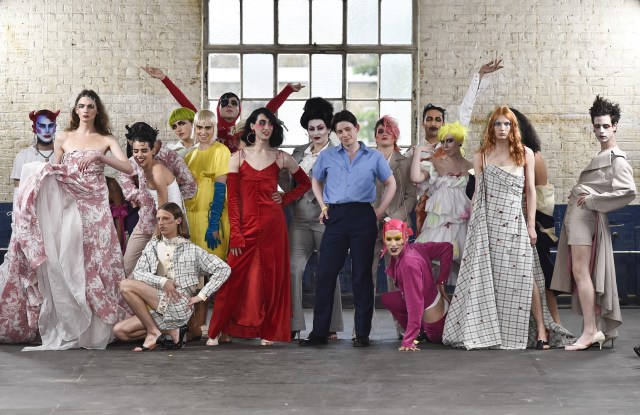 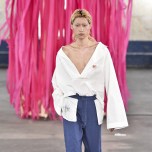 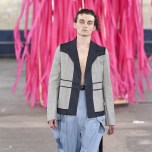 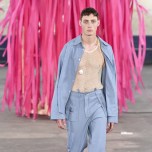 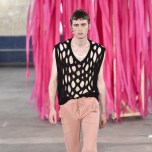 Quite the mixed bag at this season’s Topman-sponsored Man group show, held at the Old Truman Brewery in East London, where Lulu Kennedy operates her Fashion East and Man incubators for emerging talent.

Swedish-born Per Götesson made his third appearance as part of the Man lineup, continuing his explorations of proportion, construction and drape, manipulating the waistbands of wide-leg jeans to make them look as though several sizes too big. In a polished palette of sky blue, fuchsia, camel, navy and off-white, his denims — many with front pockets applied to the outside — had an almost nostalgic hip-hop look, while the salmon T-shirt with exposed garment labels that came with blue jeans showed Götessen’s aptitude for sophistication — albeit on a streetwear level.

Art School designers Eden Loweth and Tom Barratt made their Man debut, with a collection that completely did away with gender, with cross-dressing girls and boys — hairy legs, armpits and faces included — vogued it up and down the catwalk in an exuberant display of flamboyant ball culture.

All that theatricality might have been a smokescreen for less-than well-executed clothes, and certainly ran the risk of causing the rolling of eyes among jaded press and buyers, but the prowling walks, arch looks and sheer courage didn’t distract from what was a confident debut that spanned everything from flouncy gowns to a bias-cut velvet party dress and neat little skirt suits.

Rottingdean Bazaar designers James Theseus Buck and Luke Brooks were new to the Man show, but had presented thrice previously under the Fashion East mantle. “When we are at home alone I don’t even think about it, it all makes sense to us,” said Buck after the show. “But we came up [to London] two days ago for the casting and we’ve been hanging at Lulu [Kennedy]’s office, and we realized what we’re doing is quite different.

What they’re doing is applying polyurethane foam moulds of banal everyday items such as handsaws, penny coins and matchsticks to plain black tracksuits. While the pair, who first showed quotidian items like Y-fronts or flattened cigarette butts fused to white Ts, are clearly having a lot of fun playing with their medium, it would have been nice to see them move the concept along a little.