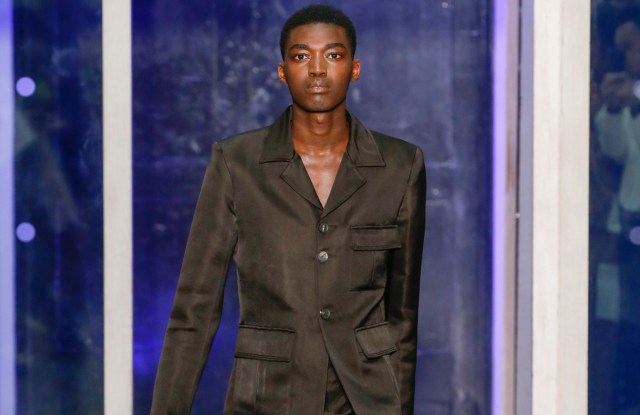 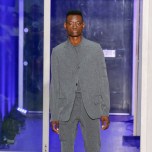 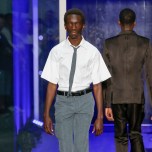 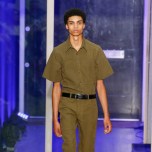 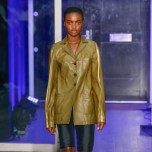 A clean simplicity characterized Grace Wales Bonner’s collection, which was filled with lean, unadorned silhouettes. It was a departure from the rich textures, embellishment and ceremonial mood she’s mined in seasons past.

“I wanted a change, I wanted to approach something through a modern lens…it was intentional to break with history in that way,” said Wales Bonner after the show. Instead, she said she’d thought about history through the prism of literature, printing a lengthy extract from writer and New Yorker critic Hilton Als’ essay “James Baldwin/Jim Brown and the Children” as part of her show notes.

Along with looking at Chris Ofili’s paintings, Wales Bonner said she had drawn on “different black artists who explored a blue mood.”

As a result, the collection had a spare, contemplative quality. Suiting was slim, with tailored pants that pooled at the ankles, and jackets both fluid and structured. And while Wales Bonner said she hadn’t looked to history, there was a vaguely retro tinge to some of the looks, as in a boxy white shirt worn with a skinny tie and tailored pants, stitched with utility pockets. The designer also mined a more masculine sensibility, veering away from the gender fluidity of her past collections — the most experimental among the looks were tailored short suits in a shiny black silk. For women, there were simple, fluid skirt-and-shirt pairings in check and abstract prints.

This was a more subdued collection for Wales Bonner, and while it might have missed some of the opulence of her past outings, it still conveyed the designer’s focused, singular vision.