Not for Billionaire, the drop-in presentation or standard runway event, but an ear-blasting live performance with a James Bond theme, miles of colored crocodile leather and sparkly pistol motifs. 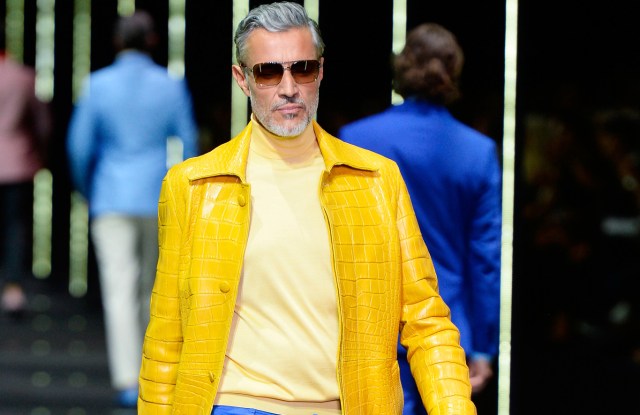 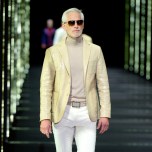 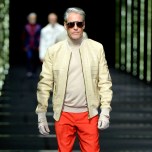 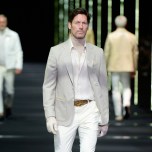 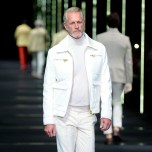 Hand it to Billionaire — the brand certainly knows how to put on a show. Not for Billionaire the drop-in presentation or standard runway event, but an ear-blasting live performance with a James Bond theme, miles of colored crocodile leather and sparkly pistol motifs.

Monday’s spectacle capped an extravagant two days of entertainment courtesy of The Philipp Plein Group, which bought Billionaire last year. Earlier this week at his signature collection show, there was a live set inspired by “Grease,” with $10 million worth of super cars and an equally expensive croc jackets. Plein Sport, meanwhile, conjured a fight club atmosphere, with professional wrestlers in cages and scantily clad pole dancers.

While the Billionaire presentation wasn’t quite as showy as those, it had its moments: There was a live orchestra and a woman in a long strapless dress belting out Bond themes such as “Diamonds are Forever” and “Goldfinger,” while a lineup of silver fox models — many of them way past 50 — showed off clothing for the older billionaire, as opposed to the Mark Zuckerbergs of the world.

But these are no Warren Buffetts either. Plein’s versions are literally peacocks parading in a palette that took in screaming yellow, hot pink, teal and turquoise for crocodile trenches and jackets. Also in the mix were bombers done in azure ostrich or orange snakeskin.

Velvet slippers came in shades of pink that ranged from hot to powdery, while sparkling ruby red pistol designs flashed from the backs of black dinner jackets. Some evening looks, done in busily patterned silk, resembled elaborate pajama tops, while others were silvery — as bright as the moon. One jacket, bathed in sequins, would have suited Liberace.

Believe it or not, not all of it was in-your-face. There were some finely tailored jackets, including a gray one worn with an eau de nil turtleneck, and a cream one with patch pockets.

“The brand has taken a big step forward over the past year and has so much potential,” said the tattooed Plein before the show. He was dressed in a black T-shirt, jeans and yellow fluoro sneakers, leaving the older folks to parade in their silk and sparkle finery.