The collection was signature Giorgio, with a subdued color palette including 50 shades of light gray. 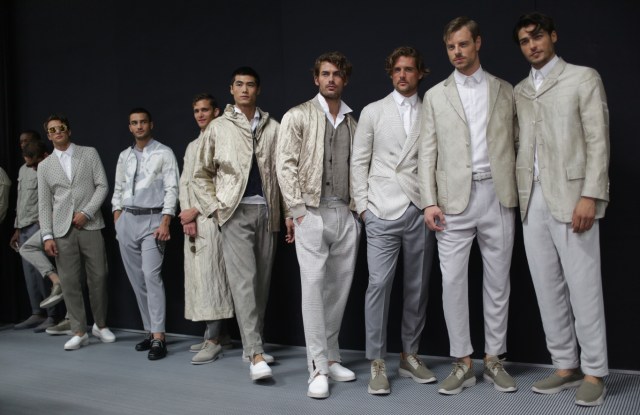 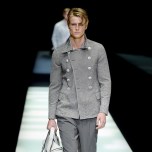 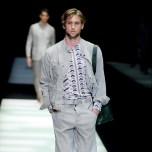 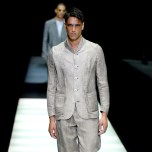 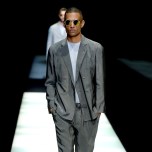 There were no show notes, just one line projected onto the screen above the runway: Made in Armani.

The phrase captured the spirit of the collection, which was signature Giorgio, with a subdued color palette — 50 shades of light gray — and many of the designer’s greatest hits. Carrot trousers, curve-hugging tailored jackets, languid workwear styles, and Far Eastern-inspired silhouettes all took a turn on the runway.

In a season when some of Milan’s biggest names in men’s wear either didn’t take part to opt for coed shows in September, or lost their rhythm and wobbled, Armani stuck to what he knows best — and sent it down the runway over and over again. The show opened with a long and elegant feather light coat in watery gray, and ended with a chic lineup of all-white suits, some of them in seersucker, others with two buttons or three buttons, shawl collars or narrow peaked lapels.

In between there was much texture and surface interest — a crinkly coppery fabric for a bomber jacket; shiny gray-white tailored jackets with subtle plaid patterns; a loose jacket with patch pockets and tailored tracksuit bottoms (no sloppy street wear here); wrinkled seersucker, and a shadowy argyle jacquard, both for tailored jackets.

Armani worked with ultra-lightweight silks, too, for snug shirts or pajama-style tops layered under boxy tailored jackets. This man can make a suit, and most importantly his suits make a man look great. That simple.