The young Korean designer Munsoo Kwon lit up the Teatro Armani runway with a burst of flowers and bright stripes in a collection called “YOLO (You Only Live Once).” 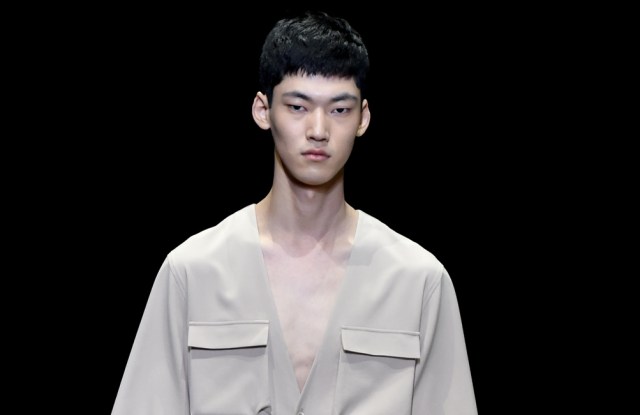 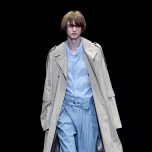 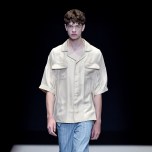 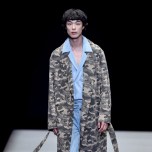 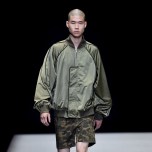 The young South Korean designer Munsoo Kwon lit up Teatro Armani with a burst of flowers and bright stripes in a collection called “YOLO (You Only Live Once!),” inspired by different men, all with lots of personality.

The Seoul-based designer was handpicked by Giorgio Armani to show in the space, and he certainly didn’t let his patron down with this slick show full of punchy color and playful touches.

Kwon is the ninth designer to show at Armani’s theater, following Andrea Pompilio, Vivetta, Au Jour Le Jour and others. The latest guest designer was Xuzhi Chen, who showed in February.

Kwon said he wanted the pieces to reflect the strong character of the different men living in South and North Korea today — and what a cast of characters they were. “Korea is a divided country,” said Kwon, who wasn’t just talking about the difference between north and south, but groups like the suit-loving Yuppies, the rich bohemian Bobos and the devil-may-care Yolos.

He layered bathrobe coats with a camouflage print over pinstriped pajama suits, winking to the young men in North Korea who do their mandatory military service — and save some of their fatigues to wear at home. That also cued a lineup of knee-skimming camouflage shorts, a long and billowy olive trench done in crinkly cotton and an oversize silk bomber in a similar color.

In a nod to the Yuppies, there were comically oversize suit jackets, with shoulder pads that stretched halfway down the arm, and brightly striped sweaters that looked about 10 sizes too big with sleeves nearly touching the ground.

For more carefree types, there was a flower-printed shirt and a wacky tracksuit made from a patchwork of primary color blocks, perfect for a children’s party entertainer. It all looked terrific, although it will take one very strong personality to carry off the tracksuit.