All the quirk and romance of the fall collection was swept away - in a moment - by Miuccia Prada, who sent her preppy nerds and rustic hippies packing. 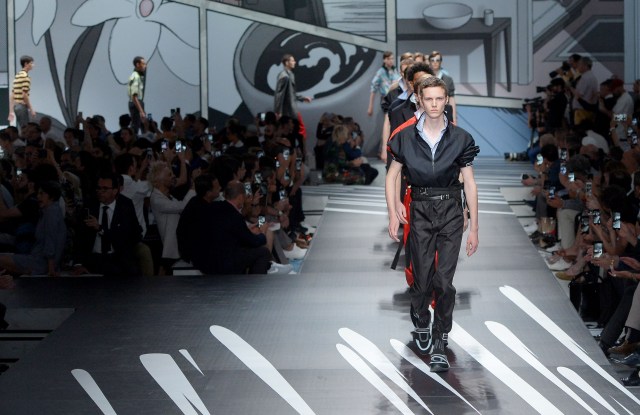 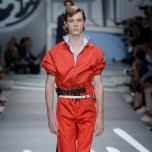 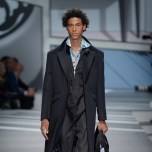 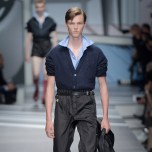 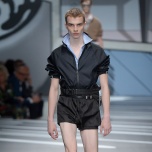 All the quirk and romance of the fall collection was swept away — in a moment — by Miuccia Prada, who sent her preppy nerds and rustic hippies packing and brought in Fifties greasers in their garage mechanic suits, snug high-waisted trousers and skinny belts. The collection promised much, but fell flat with clothing that tended toward the gimmicky.

Prada’s aim was to celebrate human talents in an increasingly digital world, one reason why the walls and ceilings of the stunning set were covered in hand-painted Roy Lichtenstein-ish cartoons with giant monkeys, bugs and ladies’ eyes with big black lashes. The sunken seating was meant to evoke a picture frame, with guests watching models parade on an illustrated surface.

“This is kind of the opposite of virtual reality,” Prada said backstage after the show, referring to the hand-drawings that morphed into patterns for her bowling style shirts and sweaters. The goal was to focus on “handmade, simple, real, human” stories. “I think we live in this double world, no? And there are all these opposites. That is what’s interesting, the dialogue — or no dialogue — between the two worlds.”

Those simple stories didn’t translate on the runway. It’s hard to imagine many men rushing to their local Prada to buy a boiler suit, a fighter pilot-style onesie, or a two-tone, leather bowling shirt to enhance their summer wardrobes. Ditto for all those tight, high-waisted trousers that narrowed around the ankle and the herringbone suit.

The topcoats were gorgeous — but their heavy wools seemed to be for the wrong season — and the sweaters, some with stripes, others with a graphic images like a big monkey, were fun. But neither was strong enough to carry the collection. Accessories were underwhelming as well: sandals and knee socks, patterned fanny packs, skinny belts, and riffs on those old square flight bags with the long straps, like the ones the airlines used to sell in the Seventies.

This was the first show that was broadcast live on prada.com, and on Instagram Live. Prada wanted the spectacle beamed onto screens and into the “far-flung lives” of viewers, like bits from a comic book strip. “Simple, little fragments of life. That is what we get now from the media. I never liked comics, I never followed them, but all of a sudden I was obsessed.”