As opposed to sourcing ideas from an artist or location, this designer lets her feelings lead the way. 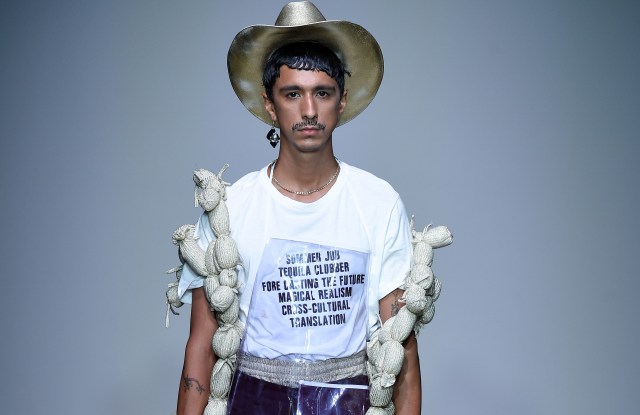 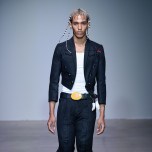 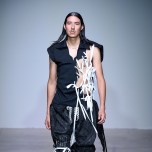 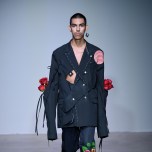 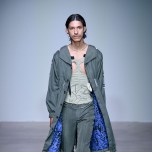 On the “about” section of her web site, Barbara Sanchez-Kane defines her label as a “Mexican clothing brand curated by emotional chaos.”

What that means is that instead of sourcing ideas from an artist, location or concept, she lets her feelings lead the way.

This season Sanchez-Kane, who launched her brand in 2015 after working for Bernhard Willhelm, parsed the sensations that come along with stereotypes and societal standards, which she mainly portrayed through constrictive design details.
Sanchez-Kane, who is known for her tailored pieces, used the curls in a pinwheel, her favorite toy as a child, as appendages on blazers, denim jackets and pants. These curls, which were buttoned to garments, sometimes connected pieces of a suit or wrapped around the looks to relay the idea of restriction. Sanchez-Kane also utilized ties, straps and metal wire — one piece sat stiffly on a model like a T-shirt — to underscore this message.
According to Sanchez-Kane, the restrictions created by social norms lead to hiding one’s feelings and this translated to pieces that were stuffed with fabric or pants that were dotted with three-dimensional boxes. She incorporated messages from her journal entries onto pieces — one T-shirt read “Freelance Lover” — along with Mexican references, including the wood beaded seat covers taxi drivers in the city frequently use and the floral tapestries that embellished a few items.
As the show went on, models congregated around an office printer where they made copies, pasted them to the walls, crumbled them up, kicked them around and sometimes threw them at each other. What did this mean? Sanchez-Kane said it was about the trial and error of life.
Despite her collection being curated by emotional chaos, the lineup felt very considered. And with a New York Fashion Week: Men’s schedule that’s dominated with mostly commercial propositions, Sanchez-Kane’s innovative designs were refreshing.