Sarah Burton wanted her men’s designs to reflect her fascination with nature and folklore. 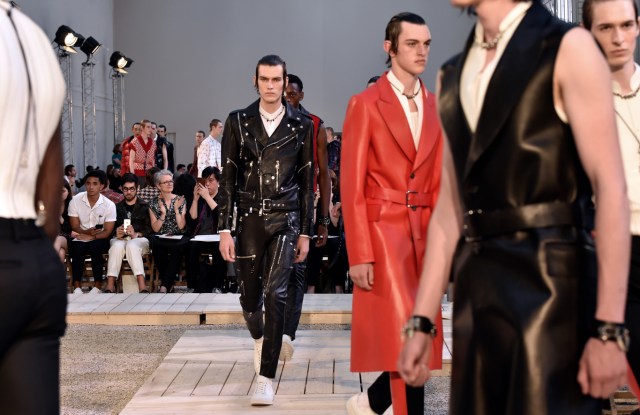 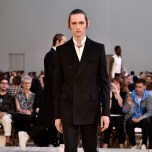 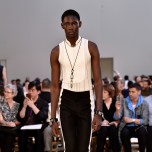 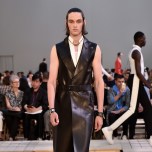 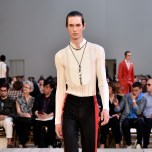 Sarah Burton is aligning her men’s and women’s collections for Alexander McQueen.

Showing her men’s line in Paris for the first time, she picked a familiar venue: the orangery at the Luxembourg gardens. Not only has it hosted several of her women’s shows, she even recycled a rug from her Shetland-inspired spring 2017 display: it was reversed and turned into a coat.

“I love the idea of paganism and make-do-and-mend, and explorers and pioneers,” the designer said backstage, adding that she wanted her men’s designs to reflect her fascination with nature and folklore, “to kind of ground him.”

To that end, she juxtaposed her trademark precision tailoring with rugged touches like handknit sweaters and selvedge Japanese denim embroidered with orienteering maps and fragments of Rudyard Kipling’s poem “The Explorer” — trailing red threads for a raw, unfinished look.

Polished coats in patchworks of camel or Prince of Wales check contrasted with flowing white shirts edged in broderie anglaise or covered in cross-stitched motifs.

“The idea is of celebrating nature as being part of nature, as opposed to this kind of clashing between the two. It’s not about conquering or ruling, it’s really about the idea of being at one with nature and the world,” Burton said.

That might explain the chunky outerwear, which felt somewhat at odds with the season. Nonetheless, it made for a poetic vision, and one that ultimately celebrated human skill.

It shone through in the raw beauty of tufted jacquard, used inside out on a jacket and coat. A black coat, embroidered with a glittering tree of life, was a ravishing example of wearable art.