Demna Gvasalia's collection was an ode to Sunday in the park with Dad. 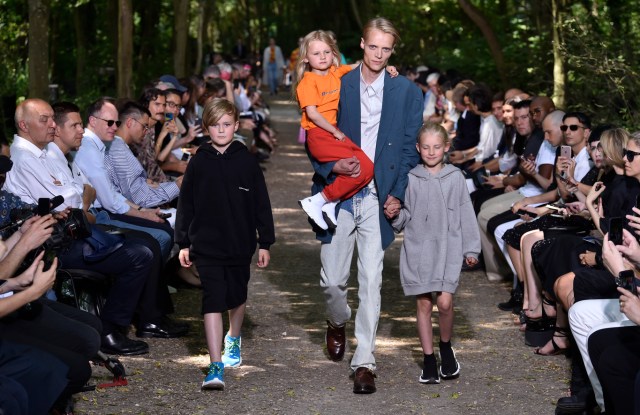 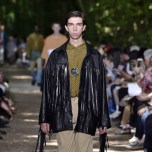 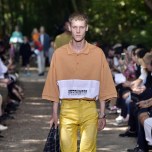 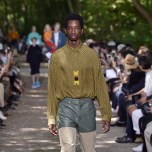 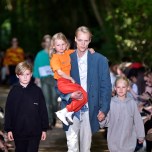 His spring men’s show for Balenciaga was inspired by fathers taking their kids to the park – and that is literally what he showed. Guests sat on plastic chairs as models, some flanked by their own brood, strolled down a trail in the Bois de Boulogne, on what happened to be one of the hottest days of the year.

These weren’t the hipster dads of Shoreditch and Brooklyn. Rather, Gvasalia imagined off-duty versions of the corporate workers he showcased for fall. Their idea of casual ranged from oversized crinkled linen jackets to Eighties-patterned shirts and light-wash jeans, paired incongruously with exotic leather brogues.

“We started this season looking at all those pictures of young dads and I felt it’s so beautiful to see a young man with a child, and it’s so hopeful and so positive,” the designer explained.

It’s one of the marketing paradoxes of our time that Gvasalia has managed to create an aura of desirability around much-reviled items like acid-washed jeans and shell suits. His sweatshirts this season bore corporate-style slogans such as “The Power of Dreams,” “Think Big” and “Europa” — an extrapolation of a parent’s dream for a brighter political future.

Stretchy polo shirts, aged leather pants and lived-in trenchcoats accentuated the feeling of cozy familiarity. Pants consisting of zippered sections of cotton, velvet and leather were more directional, although they too channeled a thrift-store vibe.

With their baggy clothes and craggy faces, some of the older models conjured a downbeat dad at odds with Gvasalia’s idealized vision. “This dad is quite rock ‘n’ roll. He used to do a lot of stuff before he got kids,” he said with a laugh.

The sportier looks were by far the most compelling. Pity the poor guy swathed in a cerulean puffer jacket, his head encased in a shirt-cum-hoodie — but that there coat is retail gold, heat wave notwithstanding. Likewise for the branded paraphernalia ranging from a mountain bike to a leather carrier bag.

Gvasalia, who recently unveiled a new store concept based on a clothing warehouse, added a layer of clear plastic to items like denim jackets and button-down shirts, as if they had just returned from the dry cleaner. It’s safe to say they’ll be flying off the rack.

Valentino’s Pierpaolo Piccioli Says Goodbye Suit, Hello VLTN: The designer is preparing to unveil a sportswear-driven collection with a new logo that plays on the brand’s classical font.

Off-White to Debut EMP TY Gallery at Paris Fashion Week: The “Another First Show” exhibition, curated by Piotr Niepsuj, will be available at the temporary gallery June 21-25.