Kris Van Assche, who is celebrating a decade at the helm, paid homage to the know-how of the brand with a new Christian Dior Atelier label. 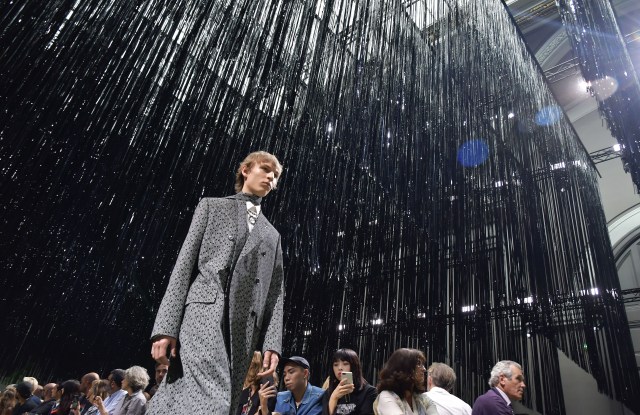 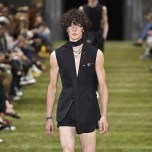 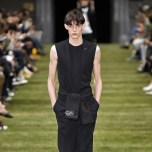 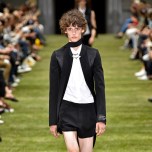 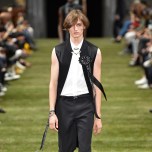 Gentlemen, tighten your belts. At a time when men’s wear is growing cartoonishly large, Kris Van Assche took the opposite tack by shrinking his suits at Dior Homme to whip-thin proportions.

The designer, who is celebrating a decade at the helm of the label, paid homage to the savoir-faire of the brand with a new Christian Dior Atelier label that appeared on the sleeves of suits, as a ribbon print on a coat, and in logo form on white T-shirts.

Van Assche used the black suit jacket as a canvas for experiments in extreme tailoring. He highlighted its sporty potential by pairing a body-skimming version with fluid pants and sneakers, or slinging a sleeveless variant over a bare chest and tiny shorts.

Dressier alternatives were sliced open at the back, twisted into minimal tailcoats, or deconstructed, with sleeves tied around the waist or neck. Still others were spliced with different garments: a burgundy jacket with a red polo shirt, or trompe l’oeil jacket flaps attached to the front of pants.

“My way of celebrating the 70 years of the house is through the expertise, the knowhow, the people of the atelier,” Van Assche said. “I’ve really been pushing the tailoring to its limits.”

But he rejected any comparisons with his predecessor Hedi Slimane, whose tight-fitting suits famously prompted Karl Lagerfeld to lose more than 90 pounds.

“It’s a fashion show. It’s supposed to make people dream. It’s like a movie, it’s like a script, and everybody knows we make a nice tailored suit. We have the made-to-measure, everything is declined within the more average normal body types,” he said.

“The big difference probably after these 10 years is that we no longer only address ourselves to the slim fit. That would be weird to hold that against me, because I’ve changed so much,” he added.

Indeed, the second half of the display had a varsity theme, with items featuring a collegiate wreath with the title of the show, Latenight Summer. Van Assche said he pictured schoolkids on vacation, chopping up their uniforms and stealing their father’s clothes.

Bomber jackets and shirts were printed with art works by French painter François Bard, ranging from portraits of young men in hoodies to white orchids. “I like this idea of young guys dressing up for the first time,” said Van Assche. They should milk it while their waistlines allow.