The design team toned down the exaggerated volumes of past seasons, and what a relief it was. 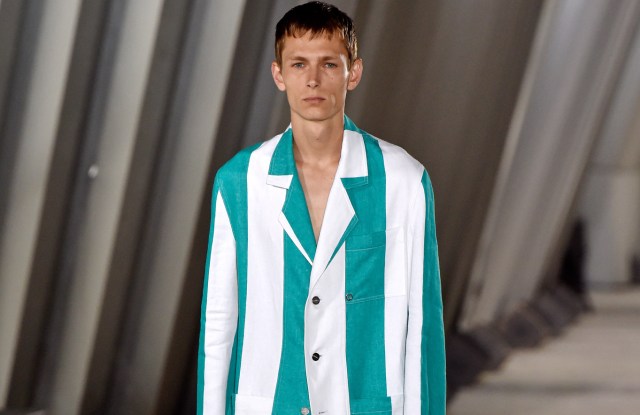 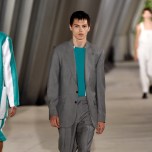 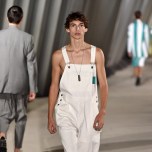 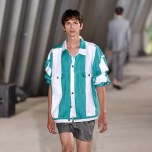 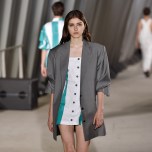 The design team toned down the exaggerated volumes of past seasons, and what a relief it was. Gone were the comic proportions of fall, and in their place some fresh and flattering looks that were an ode to Paris in the Eighties.

There was a strong workwear feel, with men and women alike dressed in black or white overalls, their pockets adorned with little green ribbon tabs resembling Metro tickets. Cropped trousers were worn with stretchy belts that read “Paris, Ville de Nos Rêves,” while striped shirts were emblazoned with the letters P-A-R-I-S, lyrics from a song by the French New Wave group Taxi Girl.

White denim jackets and corset tops came with patches of the Eiffel Tower, a Mona Lisa cartoon and other touristy bits, while another patch reading “Vertige,” or vertigo, was a nod to the dizziness of young love in the City of Light. (No fear of clichés on this runway).

The colors of the Metro also came through in a green and white striped shorts suit that opened the show and a bright yellow suit with Vertige emblazoned across the back. A boxy gray suit and oversized trenches took their swagger straight from the Eighties.

Among the highlights were long shirts with midnight blue portraits of moody figures, drinking, smoking — and almost certainly dizzy with love. The digital portraits, which also appeared on the invitation, were by the Swiss artist Louisa Gagliardi and lent a romantic air to this fun, if slightly gimmicky, collection.