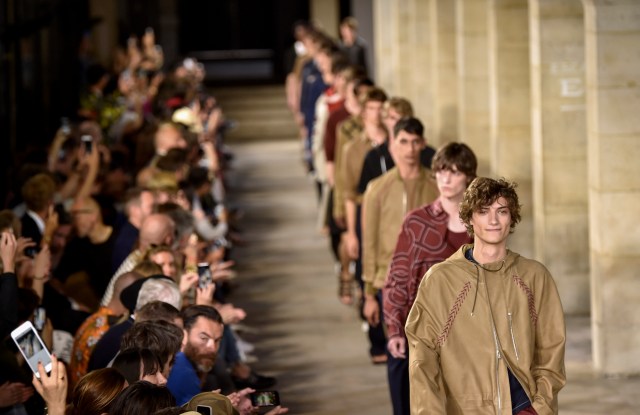 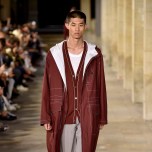 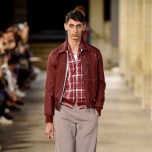 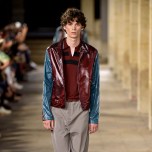 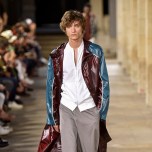 Streetwear has steamrolled through the men’s luxury landscape in recent seasons, as epitomized by the collaboration between Louis Vuitton and Supreme. When the purveyor of the world’s most expensive handbags hops on board, you know there’s no turning back.

Véronique Nichanian, who has designed the label’s men’s wear since 1988, periodically swings between old-school luxury and a more youthful take on house codes. This season proved that even she is not immune to the siren call of the street.

Mixed in among the lambskin and cashmere was a patented fabric called Toilbright, which had the glossy sheen of a foil candy wrapper. It came in colors ranging from red to apple green, cinnamon, royal blue and black.

Nichanian used it on statement items like baggy black track pants, or a burgundy-and-turquoise parka. She layered hooded and zippered tops under suit jackets, in what is emerging as a key trend for spring.

White top-stitching was used as a graphic element on items including baggy blue work wear-inspired pants and a hooded shirt in denim-colored lambskin. Baseball stitches appeared as decorative accents on a beige lambskin coat and Bolide Ball calfskin bags.

For those men who aren’t ready to make the leap, the designer included options like a black chiffon crocodile jacket inlaid with the house’s trademark Chaîne d’Ancre maxi links. Though come to think of it, wouldn’t the extravagant item be the rapper’s ultimate status symbol?