The designer delved deep into collaborations, with outfits produced with brands including Carhartt, Karrimor, The North Face and Levi’s. 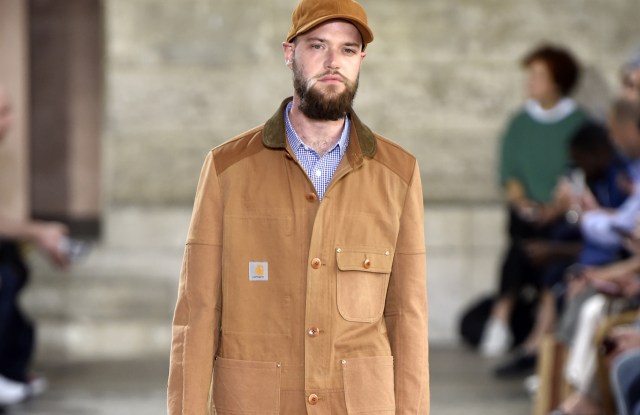 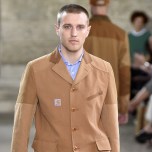 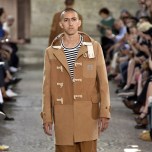 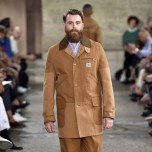 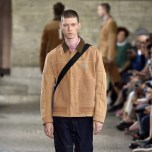 The love affair between designer labels and mass apparel brands is going strong. Junya Watanabe was among the pioneers of the concept and this season most of the pieces he showed were co-productions.

Top of the list was Carhartt, with 48 garments in total, including jackets, coats, T-shirts and pants. These included both original designs and existing Carhartt styles rendered in fabrics of Watanabe’s choice.

New collaborators included British outdoor specialist Karrimor, and Turnbull & Asser, shirtmaker to the Prince of Wales. Add to that existing partnerships with The North Face, Levi’s and German shoemaker Heinrich Dinkelacker, and you had a store’s worth of brands on display.

What did they have in common? Watanabe’s enduring fascination with workwear. This season, he was looking for a “legit” way to wear it and chose a hipster-meets-normcore cast to state his case. In the one camp: men with luxuriant beards. In the other: regular-guy types, some in spectacles and baseball caps.

They lent a grounded air to outfits including jackets and duffel coats in tonal patchworks of weathered canvas; jeans with patches of leather, suede and hickory striped canvas; work wear-inspired denim jackets with white top-stitching, and a checked windbreaker with matching Bermuda shorts.

Authentic as they were, many of these pieces will have no trouble finding their way into real men’s wardrobes. But despite the great venue — the Lycée Jacques-Decour, which inspired François Truffaut’s “The 400 Blows” — and the upbeat Motown soundtrack, the show truly reached lift-off with the last four looks.

A series of reversible coats — two by Karrimor and two by The North Face — featured deconstructed bags spliced into the back. The latter two were paired with jeans with oversized North Face logos printed on the leg, and T-shirts with artwork by Alan Kitching. A guy might not wear it to work, but as a streetwear look, it was fire.