The collection paid homage to two house muses, past and present. 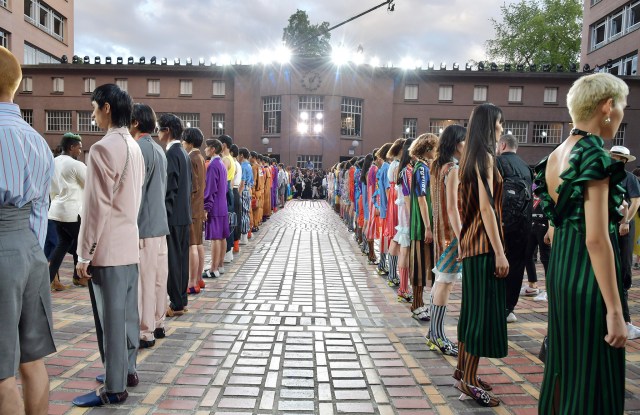 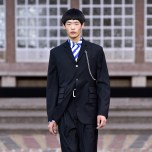 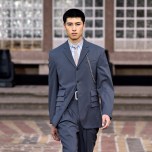 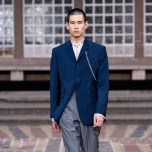 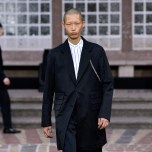 Carol Lim and Humberto Leon set out to capture the duality of two Japanese house muses past and present: Composer, activist and dancer Ryuichi Sakamoto, who the designers in their show notes credited with being “one of the people who sparks a myriad of ideas in everything we do.” And the other, Sayoko Yamaguchi, a true chameleon billed as one of the world’s original supermodels, and muse to Kenzo Takada.

The men’s section was inspired by Sakamoto’s sense of individualism, opening with a series of ultra sharp single-breasted three-button suits with embellished multiple ticket pockets and chain accents. But the designs sporting cartoonish graphics won out, recalling computer games and motor racing. They had an old-school raver flavor, with album cover T-shirts and prints supplied by the man himself.

Things took a turn for the eccentric with the softly constructed suits with roomy whirled sleeves in shades including deep purple, and the clown numbers in paisleys and micro florals. The textured colored knits, including a Rising Sun design, were great.

Channeling Yamaguchi’s unique way of clashing patterns, prints, silhouettes and colors, meanwhile, the punkish pop aesthetic of the women’s collection was fun, especially the optical effects on looks mixing stripes, though the designers overdosed on the vintage-looking frilly slips.

With the models doing turns around the vast courtyard of the Lycée Camille-Sée Paris high school, with rays of colored bricks leading to a circular center, it packed a punch in terms of a visual display. But even so, it was hard to keep one’s focus on the clothes, as the eye was drawn to a web of colored figures climbing onto the window ledges on the site’s back wall, connected by harnesses.

In the intermission between the men’s and women’s collections, Egyptian-Iranian singer Lafawndah stood in one of the windows, burst into song as the colored spider-people sprang into action and performed a dance, using elastic bungee jump cords to move across the building’s facade.

It proved a distraction, but with the design duo being as equally clever marketers as they are savvy designers, it made for a brain-searing tableau.