Lucas Ossendrijver found poetry in chaos with a collecton that spliced tailoring with work wear. 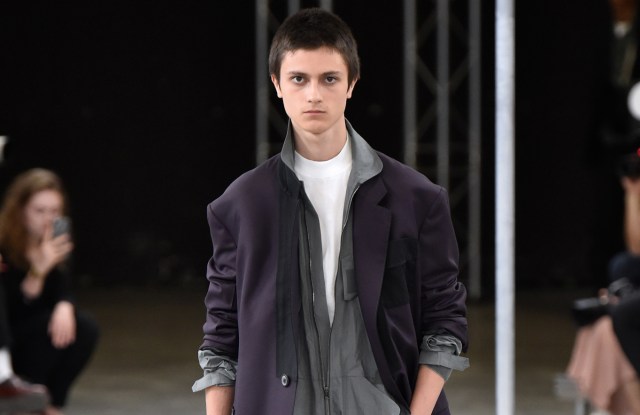 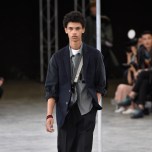 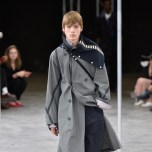 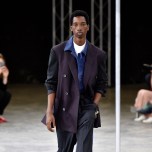 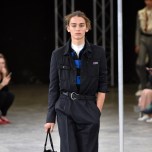 If life gives you lemons, make lemonade — or so Dale Carnegie liked to repeat. Faced with chaos, Lucas Ossendrijver decided to channel it into his spring men’s show for Lanvin.

The designer was referring to external turmoil — the political situation, our digitally distracted minds. “Everybody’s kind of zapping all the time, and instead of fighting it, I wanted to sort of engage and embrace it,” he explained backstage.

Hence the idea of zapping within an outfit to create collages of workwear and tailoring. Ossendrijver spliced a suit jacket with unlined cotton sleeves, and paired a smart navy coat with oversized gray overalls. Pants featured different materials in the front and back.

The effect was subtle at times — a reflection of Ossendrijver’s passion for deconstructing clothes from a technical point of view. Some of his experiments were more overt, in particular on the outerwear, which nodded to mountaineering and Latin American influences with woven geometric trims.

“I didn’t want anything too formal or too dressy. I think people should be at ease with what they wear nowadays, but still with an energy, with some kind of excitement,” he said. “Even out of chaos, beautiful things can come.”

In addition to global instability, he has been dealing with internal turmoil at the house. Since the departure of Alber Elbaz in 2015, sales have plummeted and management has launched a cost-cutting drive. Ossendrijver, who has designed men’s wear for Lanvin since 2005, has soldiered on.

But this collection was one of his less cohesive. “It’s not chaotic, I think,” he said. “It’s very varied, there’s lots of different propositions and options. I think that there’s a softness and poetry in there.” You could feel it in an oversized gray trench with ribbon appliqués. The red-and-black anorak with stylized dragons? Chaos theory gone wrong.