On trend and commercial – with a splash of fantasy – this collection had the wind in its sails. 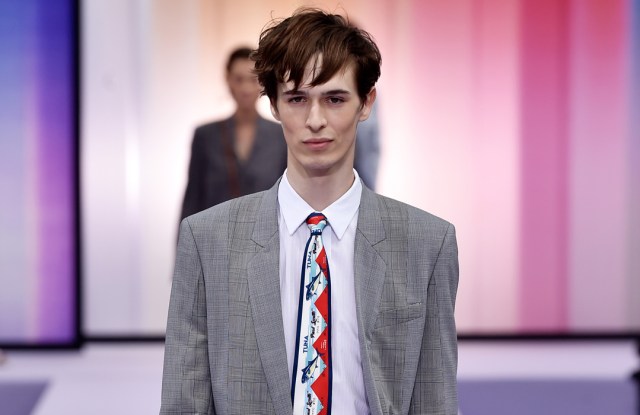 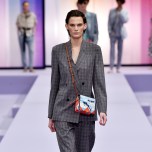 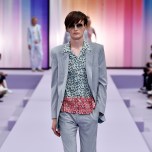 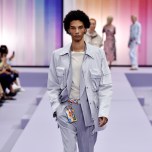 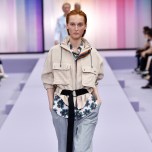 “Guess what? The collection had to do with the ocean,” said Paul Smith, who had sent rubber fish to his guests by way of an invitation, and served up fish-shaped butter cookies — and ice cream — before the show.

“In this strange world, we need a bit of fun, a bit of optimism, and who wouldn’t want to be sitting next to the ocean at this time of year?” asked the designer, who conjured starry tropical scenes, fish and flower patterns, and a rainbow of jewel tones for his upbeat, coed outing.

Silhouettes were different from past seasons: Jackets were slightly longer, with a stronger shoulder, while lapels were fixed in place. They were worn with skinny trousers and bright, patterned ties.

Fish, coral and sea anemones — partly inspired by the fish market in Japan, where Smith has a major following — twisted and floated over knits, Fifties-style bowling shirts and bombers, while flowers blossomed across dresses and sarong skirts. Leaves dropped gently over a woman’s sky blue suit, which was made with fabric turned inside-out.

Smith, who started showing men’s and women’s together in January, said this was the first women’s collection conceived as a stand-alone effort — rather than an outgrowth of the men’s, and that came through with the easy Forties shapes, wrap dresses and skirt and bright parkas with drawstring waists. On trend and commercial — with a splash of fantasy — this collection had the wind in its sails.