The show celebrated gender fluidity, with man skirts a key focus of the collection. 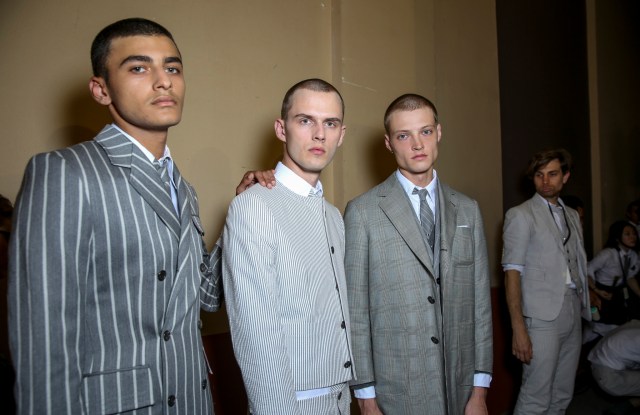 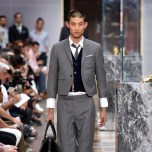 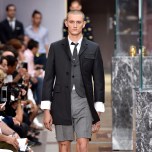 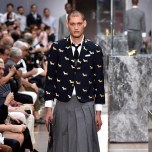 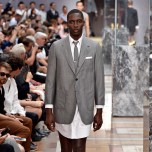 Man skirts have become a regular sighting on the runway, but they’ve never really filtered down to real life. But as the gender-fluid phenomenon continues to crescendo, Thom Browne made a convincing argument for a possibly not-so-distant future where men will turn up to the office — briefcase in hand — in a classic skirtsuit, Richelieu heels and business socks.

“You start one way as a baby, but why shouldn’t you be able to choose your own path as opposed to culturally people telling you which way to go? It’s about being open-minded to experience life the way you want it,” said the designer backstage.

Browne chose the glass courtyard of the Palais des Études of the École des Beaux-Arts as the show’s setting, with its plaster casts of ancient Roman statues and soaring glass and cast-iron roof. Its rousing soundtrack was “The Maze,” created by composer David Motion and director Sally Potter for her 1992 feature-film adaptation of Virginia Woolf’s novel, “Orlando,” starring Tilda Swinton as a gender-hopping nobleman.

Out streamed the models in suit jackets, skirts and said shoes, each pausing momentarily to gaze forlornly at a marble and glass cabinet housing a pair of golden baby shoes. (A pair of golden Richelieus sat in a cabinet at the runway’s end.)

Browne does like to hammer home his message, here sending out an endless smorgasbord of suit jacket and skirt pairings playing on extreme proportions and mixing traditional cloths, in a collection that telegraphed a mix of school girl/school boy and banker. (The short pleated skirt looks were pure Britney Spears.)

Pairings went from seersucker skirts and pin-striped single-breasted jackets to an outfit combining a long gray pleated skirt with a cropped navy blazer printed with golden dachshunds. There was also the odd dress, including one in a signature gray tailoring fabric with American flag accents, with superlong shirttails extending below most of the looks.

If there was a comedy moment, it was the show’s closing bride and groom, a single man dressed in an outfit fusing a shrunken black tux at the front with a white lace bridal dress at the back.

Asked if all of the skirts would make the commercial collection, Browne, who quipped his own skirt was “out the back,” said: “All of it is being offered. I think it looks amazing, it’s definitely not for everyone, but if I were to see somebody walking down the street in that I would want to know who that person is.”