Pierpaolo Piccioli's casual lineup was all about self-expression. 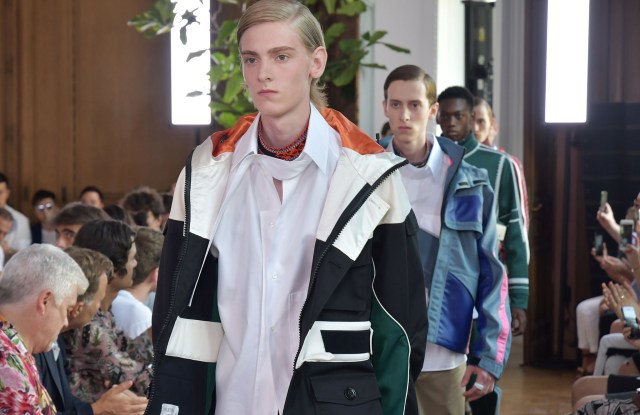 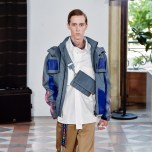 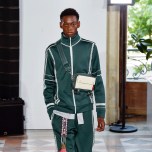 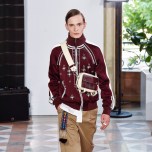 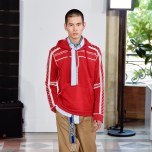 Pierpaolo Piccioli’s spring collection for Valentino was all about self-expression.

Strongly influenced by streetwear and sports, the lineup was rich in craftsmanship and personalized details, and strikingly poor in traditional sartorial options: there was not a single suit in sight.

Instead, Piccioli offered luxed-up track suits finely embellished with rows of white beads or contrasting white stitching. Wide-leg jogging bottoms could easily substitute for dress pants: witness a chic pair in mint and forest green, worn with a crisp white poplin short-sleeve shirt with a buttoned scarf at the neck.

Outerwear was equally upscale. A graphic windbreaker was made of ultra-lightweight leather, while anoraks blended nylon, leather and technical mesh with Central American-inspired touches like woven belts, geometric embroidery and colored trims.

“It’s sport meets craft. It’s very human in the way it’s done, but it’s kind of collective in the look,” the designer said. “I wanted to get the idea of different cultures mixing together into one whole world, because there is no reason to have barriers, either mental or physical.”

A new logo — the epitome of collective identification — anchored many of the looks. The VLTN emblem, rendered in the brand’s traditional font, appeared on items including white T-shirts that looked like a surefire commercial hit (indeed, blogger Bryanboy was already sporting one in the front row.)

New spins on wardrobe staples — including a black biker jacket, chino pants or a studded bomber jacket — provided more of a blank canvas for the wearer.

“Diversity means allowing people to show their personality, their individuality in their own way. If that’s the case, all the pieces have to be key pieces in a way — items to mix with your own wardrobe in your own way, to underline your personality,” Piccioli explained.

If some of the looks required a peacock spirit, the eye-catching sneakers — available in an array of colors and styles — should go down a treat with Silicon Valley types.