The brand for its “No-Show” event, held in a car park, presented looks shot on locals in Zurich, where the brand is now based. 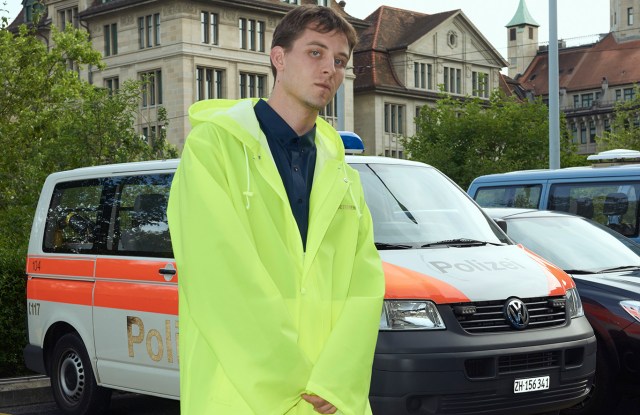 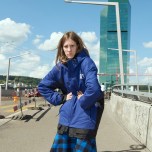 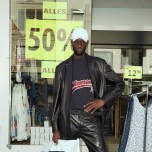 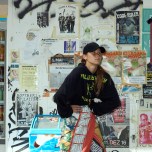 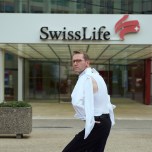 “A collection of, basically, carryovers,” is how Demna Gvasalia described the collection, based on re-editions of looks from across the brand’s shows.

“There are no novelties,” added the designer, who had shot the pieces on “real” locales in Zurich, Switzerland, where the brand is now based. For his “No-Show” event, held in a car park in northwest Paris, the designer had placed a series of supersized photos at the end of two rows of parking lots. (The actual clothes will be presented in the brand’s Paris showroom from June 26 to 30.) Guests drank beers and took in a show by Berlin’s Love Hotel Band.

Moving from a white nylon tracksuit to a tacky suit to a long frilly green dress in a synthetic bonded fabric with dots, worn by a girl carrying a loaf of bread — not forgetting the thigh-high socks and a guy in a DHL outfit — all the top hits were there. But they looked even more normcore than usual, reflecting the brand’s desire to move away from an underground vibe toward pragmatic dressing. (Garments are central to the Vetements ethos, after all).

He’d sprinkled in some new prints linked to Switzerland, though, like a girl in a wrap skirt in a big calendar print of Heidi, and names of Swiss companies the brand had appropriated, alongside brands including Tommy Hilfiger and Umbro. The designer, whose own nails were painted with Pizza Hut, McDonald’s and Starbucks logos, had also added a Vetements Zurich sweatshirt.

“All of the pieces are concepts that have existed before, from the first season through to the collection we presented in March. We just did them in a new fabric because, very often, I find ideas are so disposable, and this is a commercial product. My idea was to use what we did before and to perfect it in a way,” he said.

Of his move to Zurich, Gvasalia, who catapulted onto the fashion scene in 2014 with high-energy shows in venues including the basement of a seedy gay club and a shabby Chinese restaurant, before shifting to couture week as a guest member of the Chambre Syndicale de la Haute Couture, said: “It’s now my home, I’ve moved everything there. It was a decision linked to the fact that I personally needed to be in another place, in a normal place, less fashion-driven. I had an overdose of it, actually. I’m in a very meditative space about myself, about my life, about what creativity is.

“It feels good, it feels safe, you have space to evolve creatively,” he added of his new base. “Paris is great, but if you’re here all the time it’s a constant, nonstop system of stress. I’m 35 now and I feel like I’m at a stage where I want to take time to reflect, and to do things better. Less things but better.”