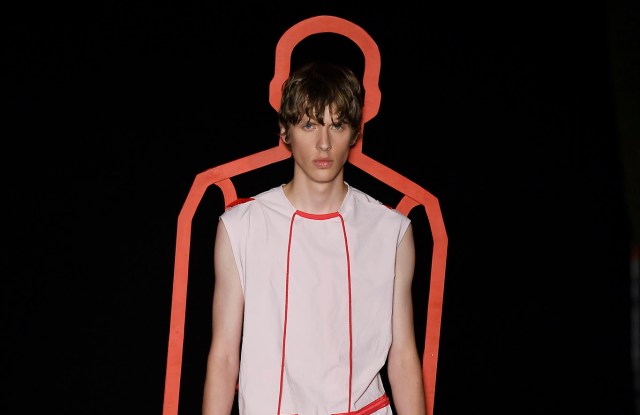 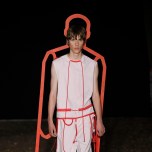 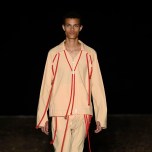 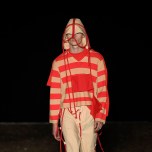 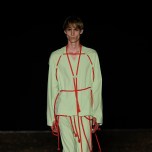 It was well worth the wait — and the mosquito bites. As Pitti Uomo’s guest designer, Craig Green, re-created a crime scene in Florence’s classical Boboli Gardens, with a Nike collaboration among the surprises.

At a preview of the collection earlier in the day, Green spoke of a photo he’d come across of a woman walking in the street. “At the moment the shot was taken, the outline of the person behind her created a kind of halo effect around her body, like a chalk outline of a body at a crime scene,” he said.

Opening with a run of pale clinical looks befitting a surgeon or forensic scientist, with red drawstring details marking out the body, the haunting image came to life in Green’s figurative sculptures, with red wooden outlines tracing the models, attached by harnesses to the back of the body.

A more abstract spin followed in the signature acid-washed quilted looks edged with colored flounces that billowed by. It felt a bit tricky, but the fabric surface drew the eye like TV static.

Green was characteristically generous in the engineering of the collection and the depth of research on textile design, blending technology and crafty tradition, utilitarianism and bold visual effects. That included a capsule of deconstructed knitted Nike Flyknit running outfits, marking the first time the fabric and technology has ever been used to construct garments. “I don’t think you can use them for running, they’re a bit extreme,” the designer deadpanned.

For now, it’s a concept capsule, he said, “the first stage of the project,” with the commercial phase yet to be defined.

Green’s take on the Sixties psychedelic trend that bubbled up in London surfaced in the tie-dye effects on quilted sweatshirts and pants created by printing layers of fabrics and then moving them slightly in different directions to create a vibrating effect.

A heavenly mood set in with the closing barefoot models pacing the garden like statues come to life, dressed in Green’s caftan-style robes tied with red ropes. They were a little body bag in shape but bore divine prints, ranging from a painterly Vincent van Gogh-style constellation to an out-of-focus image of an angel tooting a horn.

Even the workwear items — which, like the prints, are likely to be among the commercial hits — carried a spiritual message. White shirts in layers of cotton had different impressions of uniforms showing through, “like ghosts trapped inside the garment.”

Green said he based those on cleaners’ tabards and the uniforms of policemen and surgeons, with the idea that — coming back to that print — “they’re the modern-day saviors or angels.”

Also earlier in the day, Green waved off speculation he might be headed to Bottega Veneta, saying with a laugh: “I must have missed the e-mail.”