Charles Jeffrey showcased his happy space for spring 2019: a colorful world that includes everything from sportswear to sci-fi touches and extreme volume. 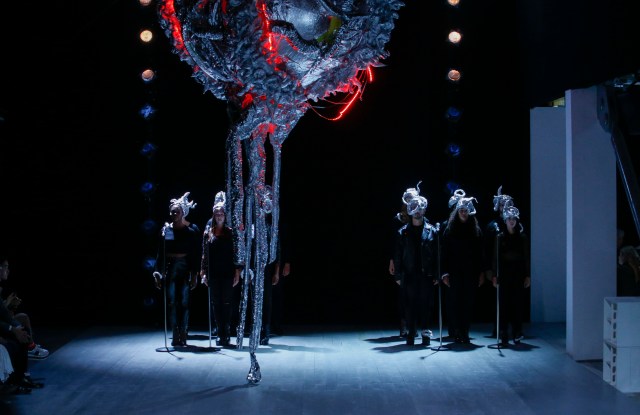 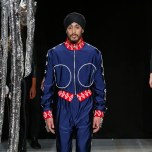 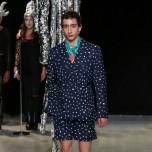 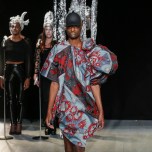 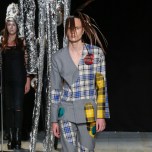 Charles Jeffrey has taken up running and it’s helped him rediscover a more youthful, carefree side to himself and create an upbeat collection that burst with color, pattern and texture.

“I’m in a very good headspace at the moment, looking after myself properly. It’s the most I have ever looked after myself and it put me in the kind of headspace that’s aligned with a younger self and a time when I felt a lot more free,” Jeffrey said backstage, explaining his first venture into ath-leisure. “There is a kind of puritanical meeting the grotesque, the puritanical coming from my first attempt at sportswear and relating to my illustrations, which I always thought could lend themselves well to this [category].”

Jeffrey went on to take his exploration of the body much further, experimenting with exaggerated volume to add his eccentric take on the body image discussion. He did so with draped dresses that hugged the body, intarsia knits featuring sketches of both skeletons and voluptuous figures and slim tailoring designed to shape the body like a Henry Moore sculpture.

Jeffrey also sprinkled sci-fi elements into the mix through futuristic headgear, a silver foil-covered set and bionic-inspired makeup. It was his way of projecting his audience to his vision of the future: “a post-gender world littered with stardust” where everyone is free to embrace their unfiltered, imperfect selves.

“I guess there was a need for me to showcase this happy space,” added the designer. At the same time, he successfully showcased that he has a lot to say and beyond a well-cut suit, a psychedelic print and a great dance party, he can offer clothes that transcend into a broader cultural conversation.