Crutchley wanted to move on from his conceptual proposals to offer clothes that felt more "real." 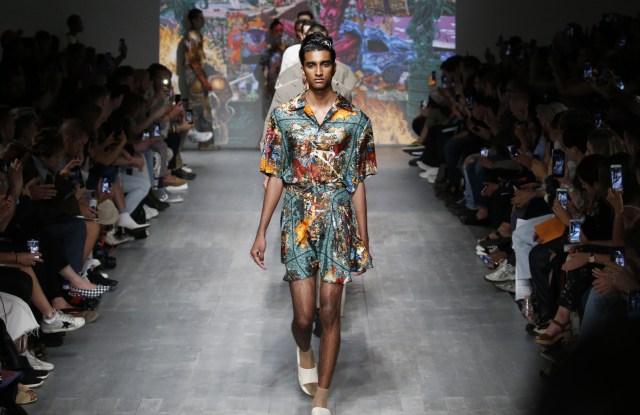 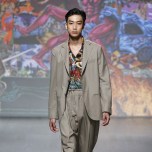 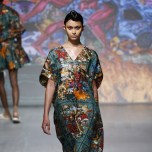 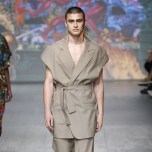 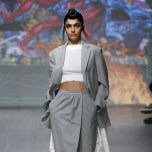 Edward Crutchley is keeping his feet firmly planted on the ground and is beginning to think about his end customer more and more.

For spring 2019, he delivered a coed collection that could look as desirable on the shop floor as it did on the runway.

“I wanted this to be a step forward. I started moving away from a more conceptual proposal to something that felt more real. At the end of the day, I’m doing a show because I want to sell clothes and I want people to wear them. They still need to be special and beautiful but they need to be real,” said Crutchley backstage.

The collection maintained a balance between the conceptual and the commercial by bringing together the intricate fabrications and patterns for which the designer is known, with more laid-back silhouettes.

Crutchley joined forces with French artist Lucien Murat, who painted his vision of a grotesque, bestial world over traditional tapestries, to create thought-provoking prints. They were applied on loose, fuss-free silk shirts and matching shorts for men and long shirt dresses for women.

He also demonstrated that his handwriting can extend beyond print with a series of loosely tailored, sporty suits that had an Oriental flavor. Among the standouts were a sleeveless samurai vest, embroidered satin robes and nylon parkas paired with tailored pants for men or midi printed skirts for women.

By using the same fabrics and approach to silhouette for his men’s and women’s lines, Crutchley continued to open up the conversation around the concept of gender-neutral clothing.

Also of note was the provenance of some of his fabrics: Crutchley worked with a Yorkshire mill dating back to the 16th century to create woven suiting, while some of the prints were produced in the oldest kimono printer in Kyoto, mixing ink jet printing with hand painting.

“It’s all about that mix of modernity and craft,” the designer added.