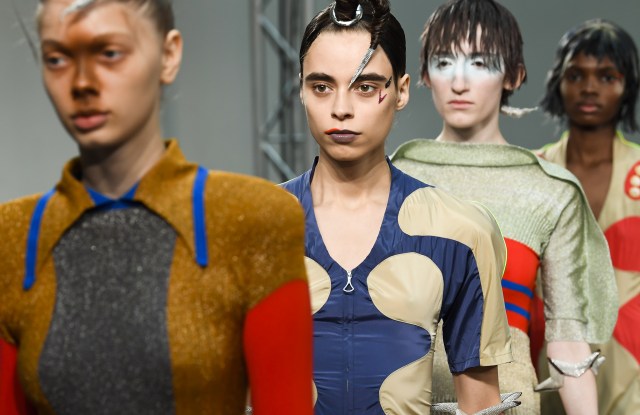 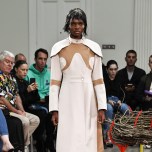 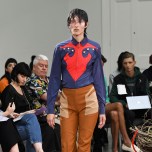 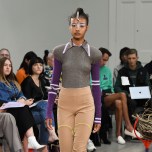 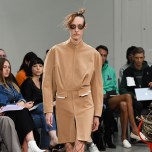 Such was the buzz surrounding Kiko Kostadinov after showing his graduate collection at the Central Saint Martins M.A. show, that before he made his debut at London Fashion Week: Men’s a month after graduating in June 2016, he had already secured an exclusive yearlong deal with Dover Street Market. The insider scuttlebutt preceding his eponymous label’s first women’s wear collection for London Fashion Week ran along the same lines.

After dipping his toe into women’s wear during his men’s show in January, Kostadinov recruited his girlfriend Deanna Fanning and her twin sister, Laura, fellow CSM alumni who graduated this year, to lead the label’s women’s wear offering, which turned out to be an assured debut built around some interesting ideas.

As with the men’s wear, this was a collection centered around innovations in cut and uniform detailing. While reading Aldous Huxley’s dystopian “Brave New World” after the M.A. show, Deanna Fanning’s was struck by the similarities between the novel and the modern world stage, and looked to the color-coded uniforms of Huxley’s caste system to inform the neutrals that formed the baseline of the lineup’s palette, from soft blush to camel and burnt toffee.

Shades of crimson, cobalt, violet and buttercup that were spliced throughout offered a joyous visual resistance, as in the constrained sleeveless pantsuit with a rainbow spectrum of poufy nylon stripes bursting out through a panel in the top.

The silhouette was inspired by Hollywood costume maestro Adrian and the severe style of wartime films in the Forties. This looked especially nice in a pale pink coat with shell-like epaulets and intricate contrasting panels in organic shapes, and in the lean lines of knitwear that confidently assimilated matte and shimmery textures.