Nicola Formichetti paid tribute to the kind of late-Nineties ravers who would only start getting ready to go out around midnight. 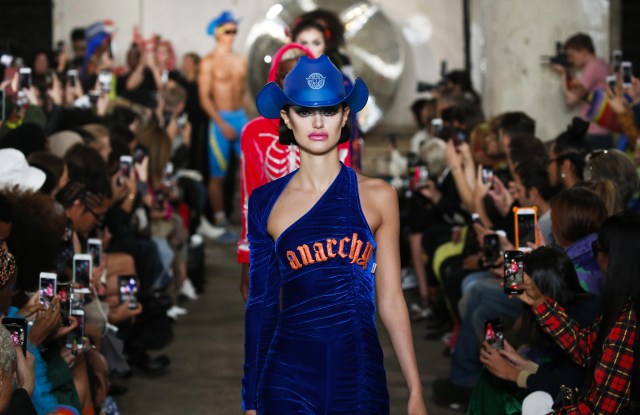 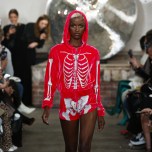 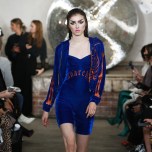 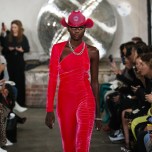 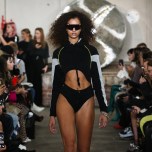 The huge disco ball at the top of the catwalk was a clue: Nicola Formichetti’s Nicopanda spring collection was a tribute to people who like to party hard. Really hard. Specifically, the kind of late-Nineties ravers who would only start getting ready to go out around midnight and finally make their entrance at 5 a.m.

In a tongue-in-cheek wink to the bedazzled Juicy Couture tracksuits that dominated celebrity derrieres in the Aughts, Formichetti sent out a pair of skintight one-shouldered velour jumpsuits in royal blue and fuchsia, and a cute blue bustier play suit with cycle short pants — all emblazoned with “Anarchy” in a Gothic font that echoed Juicy’s logo.

There was further frivolity to be found in the flounces of neon pink organza that cascaded across T-shirts or behind a sweatshirt like wings, and in the trompe l’oeil sequined dresses tacked on to the front of long tank tops. More sequins, animal prints and neon brights signaled a more glamorous outing for the brand, while plenty of sweatshirts, hoodies and tracksuits kept it all rooted in the brand’s streetwear pedigree, evidenced by the long one-shouldered mesh dress with striped trim and worn with a high-shine yellow puffa jacket.

For men, there was overt sex appeal in a leopard parka and its matching shorts, while a fluoro yellow puffa worn over a pink knit, glitter-printed with skeleton bones, and a pair of cycle shorts were slightly more circumspect.

The fruit of this season’s continuing relationship with Amazon was a fun lineup of 12 T-shirts, the first in a series ongoing collaborations between the on-demand print service Amazon Merch, Nicopanda and young global creatives. The inaugural batch featured a playful menagerie of animals hand-drawn by New York-based artist Hilton Dresden, accompanied by empowering quips like “Express Yourself Don’t Repress Yourself.”