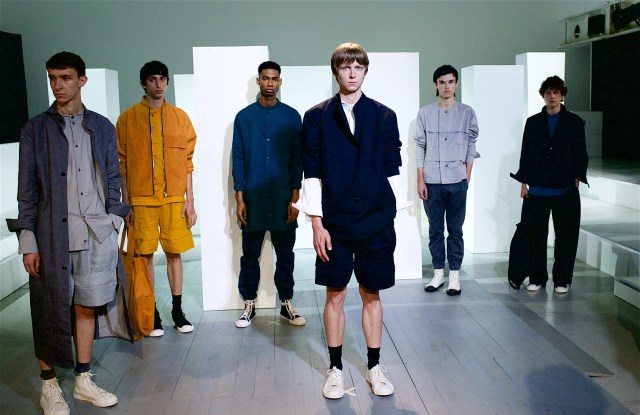 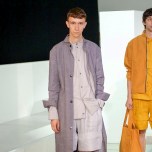 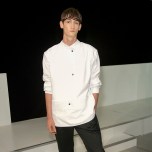 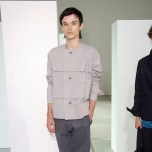 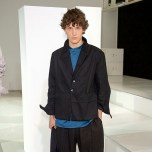 Phoebe English shifted to a coed presentation this season, citing creativity as the reason for change. Although she showed both lines at the same time, English managed to kept them separate, in design as well as in performance, with male and female models moving behind large block panels.

Men wore button-down utilitarian shirts — some were paneled to create a tierlike effect — and cropped, bunched joggers. Similar to her previous collections, English used linen waffle and waxed cotton for a crumpled effect on her garments. She also fashioned small fins on the sides of her shirting and trousers, which were only visible from the back. They added slight dimension and some interest to her otherwise streamlined shapes.

In a sea of monochromatic whites, grays, and navy blues, a full orange look stood out. “Our men’s clients really love color, so I try and always get it in there,” said English. For such a loud statement, the designer stuck to basic streetwear pieces, the orange outfit consisted of a bomber jacket, a mandarin collared shirt, knee-length shorts and a large holdall.

The women stepped out in black jelly shoes with plastic hair accessories creating cone-shaped manes. Drapy silhouettes offset those structured headpieces and her women’s wear was all about movement. Fluid bamboo silk shirts and dresses were pinched at the arms and shoulders to create tension.

Black tulle tops and slipdresses with exaggerated polka dots were used for layering and this was overlaid on top of shirts and dresses and also presented as a sweeping skirt. “It felt like the polka dots really had this energy and sense of movement, almost like molecules moving around, especially when they were escaping off the edges of the garments,” English said.